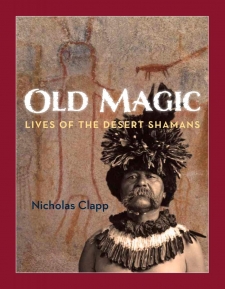 February 17, 2015 (San Diego's East County) - The title of this book piqued my interest.  I was engaged from the start and wanted to know who the Shamans were and what sort of magic they performed.  I immediately looked up the meaning of the word Shaman, and in accordance with the Oxford English Dictionary - a Shaman, is a priest or priest-doctor among various northern people of Asia—applied by extension to similar personages in other parts, esp. a medicine-man of some of the north-western American Indians. 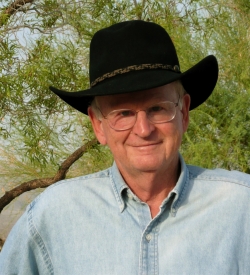 Old Magic - Lives of The Desert Shamans, is a well researched, well written social science, anthropological and historical book.  It tells the story of the lives of the desert Shamans, their culture, their beliefs in the spirits, their customs, their traditions, and how Shamans exercised their powers for both good and evil.

After reading this book I came away with the understanding that the Shamans were a complex group of Native Americans who stuck to their customs, who loved painting on rocks, and showcasing their arts wherever it can be etched.

The book is fraught with pictures of various types of rock art, or petroglyps (rock etchings) it also has geolyph or rock-scrape. 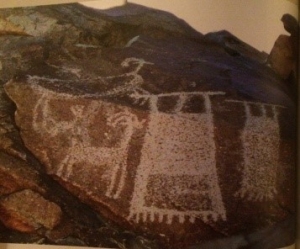 The picture above represents one of the rock art examples found in the book.  In this one you can see the etching of  some type of  an animal and what appears to be etchings of craft.  The picture below is of a boulder at McCoy Springs in the southern Mojave - it’s part snake and part man. 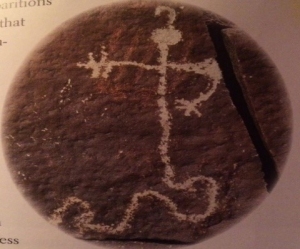 In Old Magic Lives of the Desert Shamans, Nicholas Clapp tells the story of creation from the vantage point of the Shamans and the Kumeyaay Indians.  In the story about creation, he writes:  "There was no earth or sky, no one, nothing but darkness.  But then the darkness stirred.  It was alive! And it mumbled , with eerie sounds, as if risen from the throats of faraway singers.  From time to time, lighting, or something like lightning, would flash, and glisten on the strands of what appeared to be a spider web, and in it, two very large eggs.  They hatched, and two boys emerged, first Mukat, and then his twin Tamaioit."

The story of Mukat explains creation, the time of the Black Sun (Of Darkness, Then Light). It speaks to Life's beginning, and it's end.  The author’s use of  personification is stunningly profound, he writes  "darkness stirred - it was alive".  His usage of words captured my attention and made me yearn to read further. It gave me a better understanding of the narrative.

Mr. Clapp is very descriptive when he writes about certain customs of the Shamans.  For example, in explaining the ritual of boy's initiation, he is quite detailed, and well researched. He writes, …"the boys were confined and prepared for the initiation, they knelt before a mortar and drank the portion of the kikisulem - the dry root was powerful, potent and fast acting,  the initiates staggered one by one  and crumpled to the ground, foamed at the mouth, might murmur or shriek as animals which was a good sign because an animal spirit helper was mighty. The author continues by stating that the boys will sink into a stupor, it was believed, in which they would glimpse what the future had for them and they will become men."  Wow! what a vivid description; one can actually visualize certain aspects of the initiation.

This form of ritual may seem harsh to some, however, this was the norm, which was quite acceptable and welcoming in the Desert Cahuilla ceremonials.

Old Magic - Lives of The Desert Shamans is not only a well researched historical and social science lesson, but it's also a treasure chess for anthropologist, archaeologists, and for people who are interested and fascinated by the desert, canyons, rocks, rock art, and lastly The lives of Desert Shamans of the far west, their overall history, notwithstanding their cultural as well as their spiritual beliefs.

This book  is a valuable source of reference material for Social Science as well as Native American Studies.  Nicholas Clapp gives his readers a very detailed and comprehensive study of the lives of the Desert Shamans. He did so in a sequential and factual manner. I thought the visuals of rock art, the mountains, deserts, sunsets etc. were quite appealing, and the photography was both awesome and superb.

Jacqueline Carr is the author of "A Selected Few Just For You" and she is an Adjunct Instructor at York College (CUNY). She is also a Certified Paralegal.