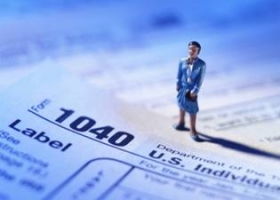 But do you know where your tax dollars are going?  You may be surprised to find out just what the federal government is prioritizing – and what it’s not.

Nearly half of the federal government’s revenues come from income taxes.  According to the National Priorities Project, the average American paid $11,715 in federal income taxes last year.

Nearly a quarter of that, 27%, went to fund the military.

Health care programs including Medicaid and the Children’s Health Insurance program got nearly 23% of your tax dollars.

14% of it went to pay interest on the national debt.

Unemployment benefits and labor accounted for about 10 cents on every tax dollar paid.

Veterans benefits account for 5%, as does food and agriculture.  Running the government itself takes four and a half cents of every tax dollar.  Housing and community expenditures take four cents.

Only about 2% goes for the education of our nation’s children.

Energy and the environment takes just under 2% of taxes.

Transportation, science, and international affairs each received between a penny and two pennies out of each tax dollar that you pay.

These figures do not include Medicare or Social Security, which we pay for though sources other than our income taxes.

As we stated before, income taxes provide nearly half of all revenues for the federal government. If we add in revenues from other sources, such as payroll taxes, where does all of that money in the federal budget go?

Overall, about a third of it is used to fund Social Security, unemployment and labor costs.

Medicare and health consume nearly 27% of the budget.

The military receives almost 17%. About 6% goes to pay interests on the debt, while 4% funds veterans benefits.  About 3% goes for agriculture and food programs.

Education, housing, and transportation each take about 2%.   Energy and the environment, science, and foreign aid each account for 1% or less.

Oh, and the smallest category of all?  For all the talk of a bloated federal bureaucracy, the government itself takes less than one-tenth of 1% -- or about one –one thousandth of the total federal budget.