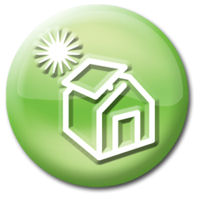 Project to streamline and standardize procedures and permitting for solar energy systems throughout Southern California
December 17, 2011 (San Diego) --  As part of the Department of Energy’s $12 million Rooftop Solar Challenge, the California Center for Sustainable Energy (CCSE) was awarded $700,000 to lead a team of 11 jurisdictions and five utilities across Southern California to streamline and standardize the installation of solar systems. The regional team will develop guidelines for expedient and uniform permitting and connection of rooftop solar aimed at reducing the cost of solar installations and making solar cost-competitive with other energy sources.
The Rooftop Solar Challenge is a national DOE effort supporting 22 regional teams working to stimulate rapid adoption of solar energy by reducing barriers and lowering costs for residential and small commercial installations. The teams are examining the non-hardware, or “soft,” costs of photovoltaic (PV) solar systems, such as permitting, installation, design and maintenance, which currently account for up to 40 percent of the total cost of rooftop systems, according the DOE.
The CCSE team includes Los Angeles County and the cities of San Diego, Los Angeles, Chula Vista, Anaheim, Long Beach, Santa Ana, Santa Monica, Palm Desert, Pasadena and Palmdale. The team also includes members of the Energy Policy Initiatives Center at the University of San Diego School of Law who will provide support on legal issues. The team will work to standardize permit processes, update planning and zoning codes, improve standards for connecting solar power to the electric grid and increase access to project financing.
“While the Southern California rooftop solar market is robust and growing, there remain considerable ongoing barriers to scaling up solar even more aggressively, in large part resulting from inconsistencies among jurisdictions for project planning, permitting and utility interconnection,” said Andrew McAllister, CCSE director of planning and strategy. “Local governments have high goals for reductions in carbon emissions, but few dedicated resources. CCSE is thrilled to be able to support the build out of local plans for greater deployment of clean solar energy.”
The CCSE team will begin in January 2012 by reviewing existing solar policies and procedures of the 11 jurisdictions in conjunction with the utility companies servicing the areas. Participating utilities include Southern California Edison, San Diego Gas & Electric, Los Angeles Department of Power and Water, Anaheim Public Utilities and Pasadena Water & Power.
The team will conduct collaborative studies with a broad base of solar stakeholders, from regulatory agencies to local contractors, to address the differing permitting requirements, codes and zoning ordinances as well as inconsistent standards for network interconnection and for selling energy back to the energy grid. The process will culminate in a model plan for improving jurisdictional and utility processes for solar in the Southern California region that further the Solar Rooftop Challenge goals, McAllister said.
The Solar Rooftop Challenge is part of the DOE’s SunShot Initiative to make solar energy more accessible and affordable, increase solar deployment and reestablish the U.S. as a leader in the global solar market. A goal is to reduce the installed coat of solar PV systems by about 75 percent by the end of the decade, according to DOE officials.
“Through this competition, the Energy Department is helping to unleash America’s solar potential by investing in projects that will make it faster, easier and cheaper to finance and deploy solar power in communities across the country,” said Energy Secretary Steven Chu.
CCSE is an independent, nonprofit organization that provides a wide range of services that help people adopt greener practices and save energy and money through rebates, technical assistance and public education. The center administers the California Solar Initiative in the  San Diego Gas & Electric service territory, providing rebates for residential and commercial solar PV and solar water heating systems.