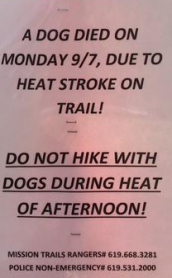 September 12, 2015 (San Diego) – A bull dog died of heat stroke at Mission Trails Regional Park on September 7th.  As a result, the park posted warnings urging owners not to take dogs on trails during the excessive heat.

But some ignored the warnings, including the owner of another dog that nearly suffered heat stroke a couple of days later, Fox 5 news reports.

This is far from the first dog to succumb on a local trail.  Dog deaths and collapse have occurred in recent years on the Cedar Creek Trail and others.

Ranger Christine Axtmann told Fox 5 that dogs have no way to sweat.  In extreme heat, giving water to a dog to drink isn’t enough.  Wetting down their groin and armpits can help bring down the core body temperature.

But the smartest move is to leave pets home when hiking in extreme heat.  Besides heat stroke, hot pavement can burn dogs’ paw pads in extreme hot weather.

Heat stroke can occur in any breed, though it’s most common in long-haired dogs and breeds with flat faces that have difficulty breathing.