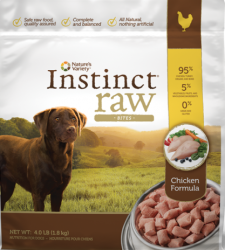 July 28, 2015 (San Diego’s East County)—Nature’s Variety has announced a voluntary recall of its Instinct Raw Chicken Formula food for dogs due to salmonella contamination.  The products, which were distributed in California including San Diego and East County, pose a health risk to pets and people.

The recall includes only Instinct Raw Chicken Formula Frozen Diets products with a best by date of April 27, 2016.

No illnesses have been reported to date. However, the company advises that the dog food can sicken animals that consume the contaminated products as well as humans who handle the food, especially if they have not thoroughly washed their hands after exposure to the products and surfaces such as counters on which they are prepared.

Pets with salmonella infections may be lethargic and have diarrhea or bloody diarrhea, fever, and vomiting. Some pets will have only decreased appetite, fever and abdominal pain. Infected but otherwise healthy pets can be carriers and infect other animals or humans, the company said.

If your pet has consumed the recalled product and has the symptoms, the company recommends contacting a veterinarian.

The specific lot numbers on packaging are:

“Even though no illnesses have been reported, consumers should follow the Simple Handling Tips published on the Nature’s Variety package when disposing of the affected product,” Nature’s Variety said in a statement.  The company learned of the problem after getting notification from the Food and Drug Administration that a product sample had tested positive for salmonella.

Consumers who have purchased one of the recalled products can obtain a full refund or exchange by either returning the product in its original packaging or bringing a proof of purchase back to their retailer.

For more information, contact Nature’s Variety consumer relations at 888-519-7387 or email via cservice@naturesvariety.com.