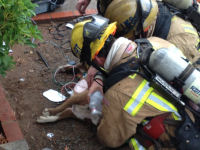 December 27, 2012 (La Mesa)—A fire that began in or near a wall heater yesterday morning swiftly engulfed a granny flat in the 8400 block of Sunrise Avenue.  After a neighbor reported the blaze, Heartland Fire & Rescue crews arrived within five minutes.

Firefighters stretched hose lines inside the building to aggressively fight the fire, while other crews vented the structure to allow smoke and hot gases to escape.  The blaze was doused within 10 minutes and firefighters prevented the fire from spreading to neighboring buildings.

A dog was found inside the structure. Firefighters attempted CPR on the dog, but were unable to save him.

Damage to the structure and contents is estimated at $50,000; cause is accidental, said Sonny Saghera, public information officer at Heartland Fire & Rescue.