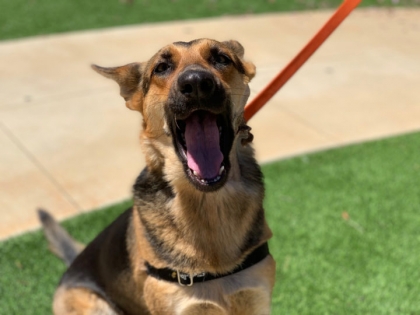 April 16, 2019 (San Diego) - A German shepherd mix who was rescued after she was trapped between boulders for at least four days will be available for adoption Tuesday. Special adoption applications will be accepted Tuesday through 5:30 p.m. on Friday, April 19.

County Animal Services says the 1-year-old dog was probably chasing a rabbit or a squirrel in a rugged area of Valley Center when she got her head stuck between two boulders.

Nearby property owners heard her yelping last Monday but couldn’t find her until Thursday.

The 40-pound dog is now recovering from crushing injuries to her face and sides at the County shelter in Carlsbad. Medical teams say Rocksann would have probably died from lack of water in another day or so if she hadn’t been rescued.

Rocksann will need ongoing care as she heals but County Animal Services says she’ll be ready to go to a forever home as soon as next week. 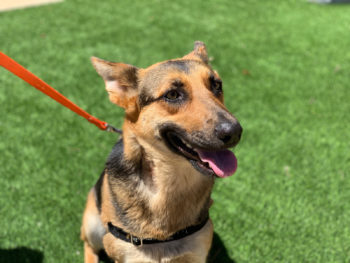 A three-day hold to see if an owner would claim her ended Sunday. A finder’s hold was also released. The County shelters are closed on Monday.

Rocksann is described as a lively girl and seems to love everyone she meets. The young dog is also a door-dasher and may want to run fast and furious if left unrestrained, so some training is recommended.

The special adoption applications can be dropped off at any of the department’s two shelters or emailed to dasinfo@sdcounty.ca.gov.

After Animal Services reviewed all of the applications, the leading candidates will be invited to visit Rocksann at the shelter in Carlsbad. The staff will then select a new home for the dog.

Meanwhile, the hold on a stray rescued from the desert at Agua Caliente County Park Wednesday ended Sunday. The dog, nicknamed Bruno, was on a finder’s hold and went home with his new owner that same day.