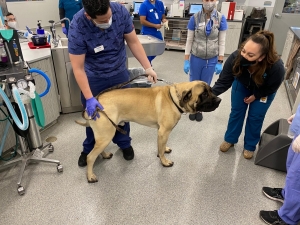 According to Cindy Peterson, who owns the affected home with her husband, Richard, Samson saved them from the fire. Samson heard a boom and started barking. The fire initially started in the garage where numerous snakes, rats, and other pets were kept.  The home, located in El Cajon, has been their home for eight years.

El Cajon Councilmember Gary Kendrick sympathized with the loss of some of the family’s pets and wished the best for the surviving animals. “Good reason to have a dog,” he said of the hero mastiff. 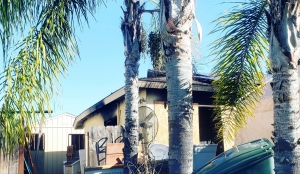 According to a statement released from Heartland Fire & Rescue, a crew from El Cajon, assisted by crews from Lakeside Fire and San Miguel Fire, were dispatched at 5:46 a.m. on Jan. 8 to the 1600 block of Pepper Hill Drive.

“Fire crews arrived within six minutes to discover a one-story-single family dwelling with the garage on fire,” states Heartland Fire & Rescue’s public information officer Sonny Saghera.  “Crews were able to control the fire within 20 minutes. The fire was confined to the garage and back wall with smoke and heat damage to the house and attic.”

“There were approximately 100 deceased snakes discovered in the garage,” said Saghera. “The cause of the fire is currently under investigation. Estimated damage for the structure is $200,000 and contents are estimated at $150,000.”

“Our hearts go out to the family who lost their animals as well as had their home damaged,” The San Diego Humane Society’s director of public relations Nina Thompson told ECM. 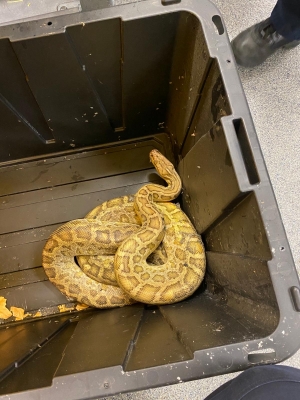 “The sole surviving snake, a 10-foot Burmese Python, escaped the garage during the fire. The owner says his large dog alerted them to the fire, so they could get out,” said Thompson.

“There is no limit to how many snakes you can own,” said Thompson. “Our Humane Officers inspected the premises and took note of how well cared for the animals were – with clean and exceptional living spaces.  The snakes had individual habitats and the tortoises had very nice backyard living spaces. No animal cruelty was involved.”

“The big dog (Samson) is being checked out by veterinarians at the San Diego Humane Society’s Pilar & Bahde Center for Shelter Medicine,” she said.

Richard Peterson, who owned the pets, said there was a potential loss of over $60,000.

The Peterson family were adjusting to the sudden displacement from their home and death of many pets.  On Friday afternoon (Jan. 8) they were standing in front of their house with friends and neighbors trying to figure out the next step.