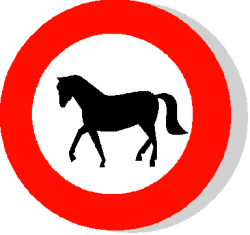 November 9, 2014 (Deerhorn Valley) – A pack of six dogs attacked a horse in Deerhorn Valley on Saturday.   Karen Sample heard her horse, Sergio, panicking and came out to find the horse kicking to defend itself against six dogs circling the frightened horse, lunging and biting. She fired a shotgun in the air to scare off the pack of dogs, the Deerhorn Valley Antler reports.

In an alert sent to residents, the Antler’s editor, Kim Hamilton warns, “Six unrestrained dogs roaming as a pack and harassing or attacking fenced livestock is a very serious safety issue for our Deerhorn Valley Animals—and humans—alike.”

The attack occurred at Spice Way near Deerhorn Valley road, where the horse was in a corral.

Hamilton said she called Animal Control to summon help, but that the dispatcher refused to send help because the call came from a third party, even after Hamilton explained that there was no cell phone service where the attack occurred. She then called 911 and the operator dispatched a Sheriff’s deputy.

Five of the dogs (four black, one tan) have been located and reportedly are now secured. The fifth, a pit bull mix, remains missing.  The Antler reports that the dog owner’s landlord was “horrified” at the news and believed that the new tenants had only two dogs—and that they would fence the property before moving in.

Unlike coyotes or mountain lions that kill only when hungry, packs of dogs may kill for sport, leaving carcasses untouched.  “Working as a pack they can easily take down a horse and inflict serious or fatal injuries before moving on,” she warned.

According to an ASPCA document titled “Predatory Behavior in Dogs,” a single dog is unlikely to pose a threat to livestock or large wildlife, But the ASPCA cautions, “Packs of dogs, however, have reportedly caught and killed deer, pronghorn antelope and livestock, including cattle, sheep and goats. Dogs don’t hunt because they’re hungry… a group of dogs can do serious damage to a herd of sheep or goats, killing large numbers of animals. In fact, dogs in groups will often participate in what’s called socially facilitated predation—one dog starts killing and they all join in."

In Houston, a pack of dogs killed 8 horses at a stables in January 2014, Fox TV in Houston reported.  The same month, a Sheriff’s deputy in Florida shot and killed a pack of dogs that had attacked and seriously wounded two horses. In August 2014, three miniature horses in Aiken County, South Carolina were also killed by dogs, ABC’s Channel 6 News reported.

Owners who allow their dogs to run loose could face serious penalties.  In most areas, it is legal for livestock owners to kill a dog that harasses, injuries or kills livestock—though the livestock owner may be required to prove that the dog’s posed a threat.

Moreover, dog owners are financially responsible for any livestock harm caused by their dogs—and in California, the owner of livestock injured or killed by a dog can sue the dog’s owner for double the actual financial loss (Cal. Food & Agric. Code Code § 31501).