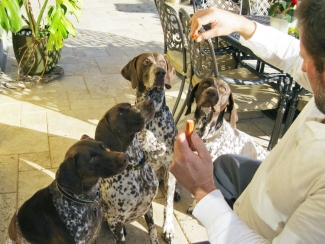 January 9, 2016 (La Mesa) — Recently, I interviewed five ebullient German Shorthaired Pointers. Their owner, George Juchum, was there, too, clearly relishing giving his dogs the run of his large home and garden  near Mt. Helix in La Mesa.

Juchum, a big teddy bear of a man, is a Polish-born naturalized American citizen who is not only proud to be an American and grateful to be living in the land of opportunity, but also very proud of his Polish roots. To this end, he started The American Polish Cooperation Society, where he can do varied philanthropic work and help others. Juchum wants to fundraise and give money to various causes, including animal shelters and rescue groups in East County.

Juchum loves all animals and his jovial personality goes well with the high energy of his dogs. They include Portos, Brie, and their three pups, Azja, Athos and Anne. He also has a pet parrot named Lady.

German Shorthaired Pointers are a sporting dog breed. They are known for going after water fowl and have webbed feet. They are affectionate and high energy hunting dogs that need a lot of exercise. Juchum’s brown and white spotted dogs have plenty of room to run and romp. The dogs are healthy and good-looking representatives of the breed.

Azja is particularly handsome and unusual. as he is mostly dark brown with only a little white. Each dog also has its own personality. Portos is the alpha dog, the papa, and a gentleman. Brie is a gentle, sweet dog and a doting mama. Azja is the most assertive of the three pups [now two years old] and gives Portos a run for his money as the dominant male. Annee is the hunter. Athos is the philosopher who is more reserved and keeps back as he likes to observe.

Juchum not only provides a very good life for his dogs, he would also like to help other less fortunate animals, and is partnering with East County Magazine to help raise funds for our nonprofit magazine to write about and highlight animal rescue places in East County, a very worthwhile cause. 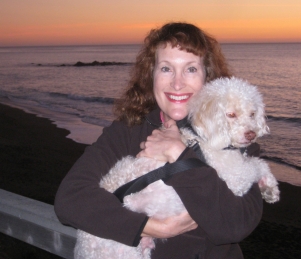