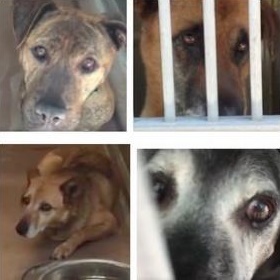 July 24, 2016 (San Diego’s East County) – The County’s animal shelter in Bonita is still seeking good homes for five of the dogs owned by Jim and Kyrie Keefe, the Potrero couple who perished in the Border Fire.  You can view the dogs in this video. Ideally, Animal Control hopes the dogs can be adopted by someone with a large yard and other dogs.

Some of the dogs remain traumatized by their ordeal during and after the wildfire, when the dogs tried for days to lead rescuers to the bodies of their owners before a group of volunteers finally organized a search and found the remains. The dogs are also traumatized from being confined at the shelter, since they were used to roaming over a large area. Some, adopted by the Keefes as strays, have not been fully socialized but none are aggressive, according to Iris Gardner, who has helped care for the dogs.

Three other dogs remain loose at the Keefe’s property, but Animal Control officers continue trying to catch them; neighbors have left food and water out. Eventually these dogs are expected to be available for adoption, too.