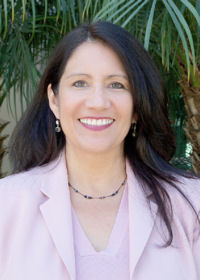 August 4, 2012 (Poway) -- The Poway Chamber of Commerce is pleased to announce that Dolores Canizales has joined the staff at the Chamber as President and CEO. She was identified from a process that drew from extensive networking contacts developed by the Poway Chamber Board. The Board invited applications from suitable individuals from their list of contacts. From a group of 10 vetted finalists and 3 interviewed candidates, Canizales was the unanimous top choice according to Poway Chamber of Commerce Board Chair Jim Crute. Canizales replaces former president Luanne Hulsizer, who resigned in May.
“We have selected Dolores based on her previous and extensive Chamber, public office, and academic experience.  She understands that increasing membership is vital to our organization.  Additionally, Dolores will work with our Board and members to ensure the Poway Chamber provides relevant, and valuable benefits and services for the local business community,” Crute added.
Canizales most recently served five years as District Director for Los Angeles City Councilwoman Janice Hahn, a post she left in 2010.  Immediately preceding that position, she was Director of Community and Governmental Relations for Loyola Marymount University.  Earlier in her career, Canizales served as Executive Director of the Hollywood and Miramar-Pembroke Pines Chamber of Commerce, both in Florida.  She was then recruited to lead the San Pedro Chamber of Commerce.  After leaving the San Pedro Chamber in 1994, she was a member of Los Angeles Mayor Richard Riordan’s staff for five years, first as an Area Deputy, and then as his Community Affairs Manager.
Canizales earned a Bachelor of Arts degree in Public Relations from San Jose State University.  She lives locally in Rancho Bernardo with her husband and teenage son.
The Poway Chamber of Commerce is a private 501(c)6 not-for-profit membership organization which works to provide leadership, education, and advocacy to strengthen and enhance economic prosperity for its members, businesses, and the region.