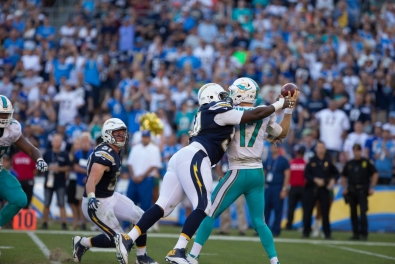 November 15, 2016 (San Diego) - The Chargers stayed home this week to take on the Miami Dolphins.

This week’s game saw a rare occurrence for the Bolts:  a scoreless first quarter.  The Bolts waited till the second quarter to tally with Josh Lambo’s 45-yard field goal to go up 3-0.  They added some more points when Philip Rivers found his favorite receiver, Antonio Gates, for a short touchdown pass to give the Chargers a nice cushion at 10-0 after the PAT.  The Dolphins swam right back into it when Ryan Tannehill avoided the blitz and aired a long ball to Kenny Stills and suddenly, the Dolphins were within three after the extra point, 10-7.  It remained that way when we hit the half.  The lowest-scoring first half for the Chargers this season. 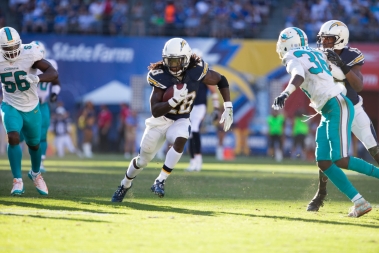 In the second half, the Dolphins came back with a vengeance.  After a great long run by Boise State grad Jay Ajaye and a catch by Jarvis Landry, Damian Williams barreled ahead at the goal line for the touchdown and Miami took a 14-10 lead in the third quarter after the extra point.  But Rivers thought that wasn’t a big deal and threw it to his other tight end, rookie Hunter Henry and the Chargers reclaimed the lead 17-14.  That pass tied Rivers with John Elway for in touchdown passes with 300.  But Tannehill is just as good and aired it to Williams again and the Dolphins jumped out in front again, 21-17. 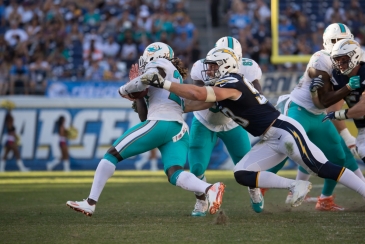 In the fourth quarter, all looked lost.  The Chargers looked like they were about to go back to their old fourth quarter ways, but none other than Tyrell Williams put that rumor to rest.  He caught a pass across midfield and took it to the house and the Bolts went up by three, 24-21,  with four minutes left to play. Rivers broke the tie with Elway and moved into eighth for most touchdown passes of all time with 301. But after Tannehill aired a long pass down to the 10 yard line, Andrew Franks kicked a 24-yard field goal to tie the game at 24.  With a minute left, the Chargers had their last opportunity to take the lead, but on a pass play, Rivers threw his third interception and this time, it hurt badly.  Kiko Alonso picked off the ball and returned it for a 69-yard pick six.  The Dolphins went ahead 31-24.  The Chargers tried one last time to tie the game with a minute left, but Tony Lippett gave Rivers his fourth interception of the day and sealed the win for the Dolphins.  They go to 5-4 while the Chargers fall to 4-6. 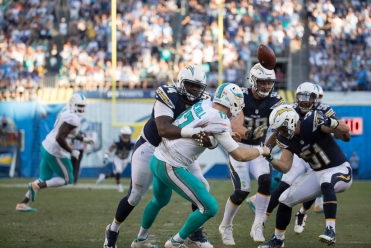 This week, the Chargers will take their bye week before heading out on the road Thanksgiving weekend to face the Houston Texans.  Kickoff is at 10:00 a.m.