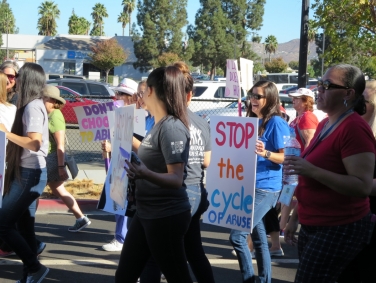 Countywide, the number of incidents has dropped 5% over the past year.  But some communities saw disturbing increases, including a 32% rise in domestic violence incidents in Lemon Grove, 26% in Santee and a 14% increase in La Mesa from 2015 to 2016.

Looking over a four-year period from 2012 through 2016, domestic violence incidents countywide dipped by 1%, after spiking in 2015.

But incidents have trended upward in La Mesa and Lemon Grove over the four-year period, up 20% and 8% respectively.

In the unincorporated areas, domestic violence incidents rose 4% over the four-year period with the highest number of cases in 2015.

Last year, there were 12 homicide victims reportedly killed by intimate partners—11 female victims and one male.  Another domestic violence incident resulted in death of a woman’s parents at the hands of her ex-husband.

To assure they are not forgotten, here are their names:

On January 1, 2016 Mary Katherine Fa’anunu (34) was shot to death by her estranged spouse Hauati Fa’anunu (42) in their El Cajon home. Hauati was convicted of first degree murder and sentenced to 50 years to life in prison.

On January 24, 2016 Regina Moore (48) was beaten to death by her boyfriend David Ashton (63) in her Pacific Beach apartment. David was convicted of second degree murder and sentenced to 15 years to life in prison.

On May 13, 2016 Ginger Curtis (41) was stabbed to death by her boyfriend Robert Oakes (54) and her body was later found in his pick-up truck. Robert died by accident the following day while evading police in El Cajon.

On June 10, 2016 Krystal Mitchell (30) was allegedly strangled to death by her boyfriend Raymond McLeod (32) in their friend’s apartment in Allied Gardens, San Diego. Raymond fled and is still at large.

On June 13, 2016, Elizabeth Perez (38) was shot to death, allegedly by her boyfriend Edward Long (38). Her body was later found in her vehicle next to a highway in Escondido. The trial for this case is scheduled for January.

On September 11, 2016, Suzanne King (64) was shot to death by her fiancée Ren Verasco (69) in their Imperial Beach apartment. Ren died by suicide.

On September 29, 2016, Arnisha Harris (35) was shot to death by her former boyfriend Joseph Henry Robinson Jr. (44) at her place of work in Torrance, San Diego. Joseph died by suicide.

On October 12, 2016, Vanessa Bobo (29) was shot to death in her apartment in San Carlos, San Diego allegedly by boyfriend Roderick Lamar Harris (32). The trial for this case is scheduled for February.

On November 18, 2016 Jose Torres-Manriquez (29) was stabbed to death, allegedly by his girlfriend Alda Garcia (35), in their Escondido home. The trial is pending for this case.

On December 17, 2016, Donna Lynn Hixson (48) was strangled to death in their motorhome in an unincorporated area of Vista, allegedly by her boyfriend Nathan Rivera (42). The trial is pending for this case.

On December 26, 2016, Melisa Contreras (22) was strangled to death, allegedly by her former boyfriend Uriel Leon (24), in a vehicle outside of his home in Oceanside. The trial is pending for this case.

On November 13, 2016, Juan Carlos Fernandez (22) shot and killed his ex-wife Isabel Gonzalez’s (21) parents – Reyna Gonzalez (42) and Julian Gonzalez (45) in their City Heights apartment. Isabel’s mother was attempting to shield Isabel from Juan’s gunfire and her father was attempting to wrestle the gun away from him. Juan dragged Isabel into the street with a gun pointed to her head and refused to surrender. SDPD shot and killed Juan. Isabel and her grandfather were wounded during the incident, but fortunately survived.

*Note: These descriptions are based on public information only. Many of these cases have not completed the court process.

For victims experiencing serious domestic violence, the time when they are considering leaving the abuse, the period when they are taking steps to leave, and the months following leaving can be the most dangerous times, a law enforcement source advises ECM, adding, “It’s critical that they connect with a domestic violence advocate for safety planning and support.”  http://www.thehotline.org/help/path-to-safety/

The San Diego County DA’s Office offers a variety of resource information and education/resource booklets on this website: http://www.sdcda.org/helping/domestic-violence.html

The National DV Hotline has a great website, phone line and chat feature:

View a domestic resource guide for victims with lots of links to get help locally.