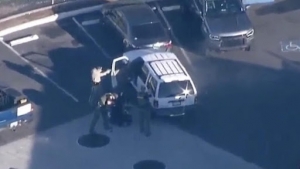 December 1, 2021 (El Cajon) – A man who reportedly threatened another person with a gun during a domestic violence dispute in City Heights early this morning fled the scene when San Diego Police officers arrived shortly after 7 a.m.

The suspect, who was driving a white SUV, led officers on a high speed pursuit first to Kearny Mesa. California Highway Patrol joined the chase but halted when speeds reached up to 100 miles per hour near a school, the San Diego Union-Tribune reports.

Later the vehicle was spotted in Lakeside and a pursuit into El Cajon ensued around 8:30 a.m. The gunman struck a parked car before stopping at an ARCO gas station at 503 North Mollison Avenue in El Cajon, ABC 10 News reports.

He exited the vehicle with his hands up and lay on the ground, where officers with guns drawn took him into custody.