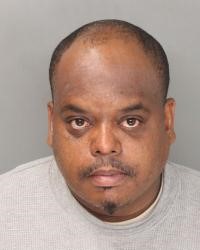 Based on surveillance video and witnesses, police are seeking a suspect, Donald Ray Lewis of El Cajon. He is considered armed and dangerous, according to Lieutenant Frank La Haye and a warrant has been issued for his arrest.

Officers responded to a shooting report at an apartment complex at 989 Peach Avenue in El Cajon, where they found Crawford lying on the ground in the parking lot, suffering from a gunshot wound.  He was transported to an area hospital for treatment but later passed away from his injuries.

Lewis’ whereabouts are unknown and a warrant has been issued for his arrest.  He is a black male adult, 40 years old, 5 feet 7 inches tall and weighing 190 pounds.

Detectives are actively investigating this case at this time.  If you see Lewis do not approach him, call 911.  Anyone with information regarding this incident is encouraged to contact the El Cajon Police Department at (619) 579-3311.

Individuals with information on this crime who wish to remain anonymous can contact the Crime Stoppers tip line at (888) 580-8477.