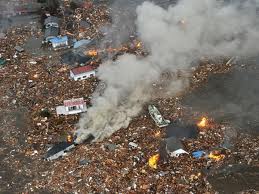 March 12, 2011 (San Diego) -- The massive 9.1 earthquake-fourth worst in recorded history--and subsequent tsunami in Japan Friday has left the world reeling. More than 1,300  are dead, Modern Tokyo Times reports, and 88,000 missing according to Business News. Today, 150,000 have been evacuated due to emergencies at nuclear reactors.

The effects of these disasters are being felt around the world—including locally.  Now some arelooking to extend a helping hand. The relief effort following the tsunami will  be a massive undertaking, and donations are urgently sought.

According to Congresswoman Susan Davis, the U.S.S. Ronald Reagan is on its way to Japan to provide assistance in the relief effort. Having previously lived in Japan, Congresswoman Davis has taken it upon herself to provide as much aid as possible to those affected.

“I’ll continue to carefully monitor these events and am in touch with officials from FEMA and other agencies to ensure that the needs of impacted coastal citizens and communities are met,” said Davis, in a press release.

According to the San Diego Union-Tribune, Save The Children will be organizing its Children’s Emergency Fund to help the children and family affected by the tsunami. The Japan Earthquake and Tsunami Fund has also been set-up by Globalgiving.org, the relief fund has already collected thousands of dollars, according to the Union-tribune.

Many organizations are on standby, as the Japanese government continues to evaluate the needs of the people.

The International Rescue Committee, which sent local relief teams to assist in Haiti after its earthquake, recently commented on the issue stating, "Once we know more, including what the Japanese government requests from the international community, we'll be able to better assess a possible response. Japan is well equipped as a responder, and this may be an instance where aid organizations are not asked to respond in large numbers.”

ECM has also learned that the Rescue Task Force, a relief organization founded in El Cajon and which specializes in aid to countries hit by natural disasters, is still evaluating options and has no plans at the moment to provide aid in Japan.

HOW YOU CAN HELP

Donate From Your Phone

The Salvation Army is collecting $10 donations for each text with the words "Quake" or "Japan" sent to 80888. Donations can also be made by calling 1-800-SAL-ARMY.

The American Red Cross is also collecting donations via text message. Donors can text "REDCROSS" to 90999 to give $10 for relief efforts.

Donate via the Internet

The Salvation Army is collecting donations while its counterpart in Japan responds to victims' needs. https://secure20.salvationarmy.org/donation.jsp

The American Red Cross is collecting donations for its disaster relief efforts to help people in Japan and throughout the Pacific. http://american.redcross.org/site/PageServer?pagename=ntld_main

Save the Children is collecting donations and has dispatched an international emergency team to assist staff in Japan. https://secure.savethechildren.org/site/c.8rKLIXMGIpI4E/b.6617251/k.7E71...?

International Medical Corps' Emergency Response Fund is collecting donations and is preparing to send relief teams and supplies to the country. https://www.internationalmedicalcorps.org/SSLPage.aspx?pid=1967

Donations to GlobalGiving's Japan Earthquake and Tsunami Relief Fund will be distributed to a variety of relief and emergency services agencies. http://www.globalgiving.org/projects/japan-earthquake-tsunami-relief/