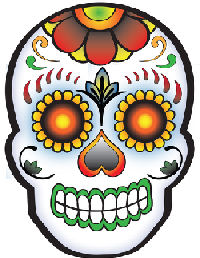 October 30, 2012 -- Halloween has become a very popular holiday being celebrated in many communities for days and even weeks before October 31. Just look in the  local entertainment sections of the community newspapers and websites will confirm the many parties, carnivals, concerts, sales, and displays provided for those interested in a spooky celebration! Halloween celebrations create fear of the dead, zombies, and displays of creepy graves where ghoulish spirits return to disturb one and all.

On the other hand, Día de los Muertos, traditionally celebrated on November 1 and 2, honors death. The holiday is celebrated to celebrate the memories and spirits of friends and relatives who have crossed over. In the past, it was celebrated for as many as two months. The dates are observed in many Latin American countries and in the U.S. as well. 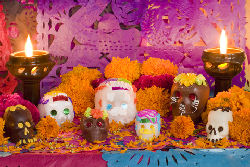 One of the traditions included in the observance of Día de los Muertos is the building of an altar to remember the friend or family member who has died. The altar may consist of photographs of the deceased,  a special bread called pan de muertos, other foods, flowers usually marigolds, and special things that were the loved one's favorites. Figurines depicting the loved one are often seen in the displays.

Decorations made of papel picado are often displayed around the altar or in the cemetery. Evening ceremonies in the cemeteries are of accompanied by musicians who sing the favorite songs of the loved one being remembered.

With the tools available today, there is so much information on Día de los Muertos! At each of these sites, there are articles, videos, projects, and more!