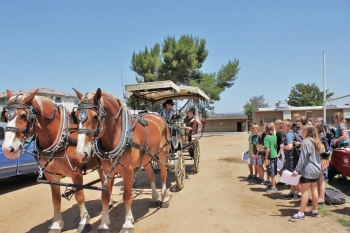 s and video by Billy Ortiz

June 30, 2012 (Lakeside)-- Lakeside Middle School held  its first annual Harold Hilliker Farm Day on May 30.  It  was a day full of information on agriculture, highlighting several Lakeside farms for the 6th and 7th graders.

View a special video tour of local farms in Lakeside created for the Lakeside Historical Society by clicking  this link.

Kids got to meet some farm animals and take a ride in a horse-drawn carriage.

Hiilliker’s Ranch Fresh Eggs has been a family affair since 1942. Frank & Josephine Hilliker began ranching in Encanto. As San Diego began encroaching on the farm, they moved it to Lakeside, where the farm continues to this day. There they began their family and grew the business. Harold Hilliker was born in 1942 and worked the farm until his passing in 2009. Through the years that Harold lived in Lakeside, apart from working his ranch, he spent a lot of time giving to the local communities.  His children, Frank & Lara, grew up working the farm, and continue the family tradition. Other family members also help the farm run smoothly and the next generation is also spending free time working on the farm. 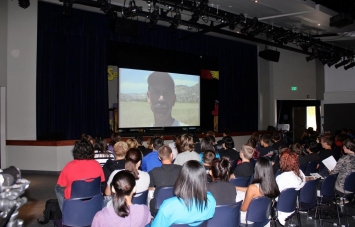 I was given the privilege of putting together a video documentary of some local farms and ranches past and present here in the Lakeside area. This by far  was the most rewarding project I have taken on.

I grew up in Lakeside and have never moved away,  Like many others, I attended Lakeside Middle School. When the opportunity was offered to me to create something for the school I knew it was my chance to give back to the community that  I have come to love over the many years.

In the process I met lots of great people in our East County community. I visited  a worm farm, avocado  orchards, and alfalfa sprout farms.  I also visited a farm were the plants are grown for their seeds. I even went along on a ride in  a big farm tractor that was cutting oat hay to be baled up and shipped off to the local Dairy and FFA school programs.

Lakeside middle School recently went through some upgrading. The school has a new look but an old feel to it. Several of the original buildings are still being used and many more have been added to fill the need of a growing school.

Principal Steve Mull has worked hard to make the school what it is today, complete with a state-of-the-art theatre for the kids and the community. It was sad to see the old auditorium go, but the new one will bring much joy for years to come.

Many thanks to Lakeside Middle School for a successful First Annual Harold Hilliker Farm Day.