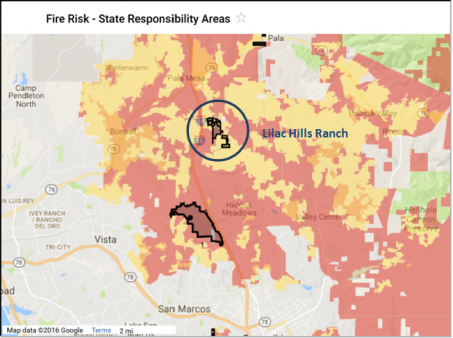 By Miriam Raftery
June 24, 2020 (Valley Center) – The Lilac Hills Ranch, a proposed 1,742-homes development in rural Valley Center, has been a lightning rod of controversy for the past 15 years. In 2016, over 64 percent of voters rejected the project when Measure B went down in flames. Today, County Supervisors agreed with recommendations by staff and fire officials, rejecting the project due to the danger of residents becoming trapped should a major wildfire force evacuation.
The General Plan allows just 110 units on the site, yet developer Village Communities LLC (formerly Accretive Investments) has long pushed for more than 10 times that number with no plan for evacuating some 5,000 residents in a firestorm.
“Any project that blows up our general plan and puts property and life in peril—not acceptable,” Supervisor Dianne Jacob said during the hearing. She called the proposal a “bad project” in “the wrong location.”
The project manager, Jon Rilling, has claimed that the developer would “get vegetation management funded” to make residents safer than at present, if the project were approved. But that belies that fact that the developer was never able to secure easements along both sides of West Lilac Hills Road that would have been needed to fulfill that promise. The developer also lacked an agreement with Deer Springs Fire Protection District to cut fuel breaks.
Cal Fire Chief Tony Meacham said the risk of entrapment of motorists on West Lilac Road “exceeds what we feel to be an acceptable level of risk,” adding that from a tactical standpoint, “There is no place for us to hold a fire until it gets to the community.”
Supervisor Nathan Fletcher rejected the project on both fire safety and environmental grounds.
In a statement after the hearing, Fletcher noted that the county fire chief, voters, and the courts have all found fault with the proposal.  “For too long, the county board has supported development projects that do not comply with our General Plan, and do not address wildfire concerns. It is time for things to change. We need to support projects that meet the General Plan, address climate change and air quality by building near transit stops, and reduce vehicle miles traveled.”
Only Supervisor Jim Desmond voted in support of the project.  He made a motion to send the plan back to county staff for yet more revisions, but the motion failed. Desmond later said he believed it’s “not good government to deny a project when the developers are willing to continue working on a solution,” Times of San Diego reported.
The project was first proposed in 2005 and rejected by local planners in 2009. The developer won an appeal to the county Planning Commission.  However, the project never got a vote before Supervisors, since Supervisor Bill Horn was forced to recuse himself because he owned land nearby and the FPPC ruled that he had a financial conflict of interest, leaving no majority on the board willing to back the controversial proposal.
In 2016, the developer tried an end-run around Supervisors, putting Measure B on the ballot countywide, spending heavily on advertising to try and persuade voters to approve building the massive, sprawling development. But voters rejected it by a two-to-one  margin. At the time, Mark Jackson, co-chair of the No on B campaign, hailed the victory, stating, “The voters in San Diego county wouldn’t let an election be bought.”
The developer contended that the project was needed to provide affordable housing, but in fact the project catered predominantly to wealthy homebuyers.
Fast forward to 2020, when the county planning commission and fire officials came to a rare agreement that the project was simply too great a fire hazard to be built, perhaps mindful of the tragedy in Paradise, California, where 82 people became entrapped and died after a wildfire roared through the rural community.
At the San Diegans Against Lilac Hills Ranch page on Facebook, the mood was celebratory after today’s landmark vote, which reduced the developer’s hopes to ashes.
Organizers thanked Supervisors and residents for their support.
Multiple residents also posted comments urging voters to oust Supervisor Desmond, who voted against the majority of constituents who weighed in against the Lilac Hills Ranch project, which would have been built in his district.