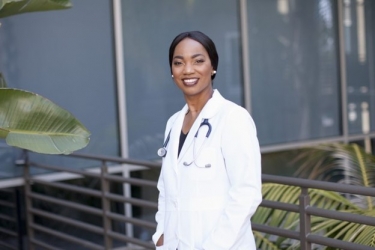 Update April 11: Dr. Akilah Weber has won the election outright, avoiding a runoff with 52% of the votes. Only 300 ballots remain to be counted, not enough to change the outcome.

The younger Weber, a Democrat, received 52% of the vote, according to final unofficial election-night results from the San Diego County Registrar of Voters.

The projected number of outstanding ballots is 9,500, according to the Registrar of Voters. If Weber’s total remains above 50%, she will be elected without a runoff. If it falls below 50%, she will face Marco Contreras, the lone Republican in the field of five candidates, in a runoff June 8.

Contreras has 33% of the vote, and three other candidates, all Democrats, split the remaining 15% of the vote.

“Tonight’s win and these results are staggering,” Weber said. “I am deeply honored and humbled by the faith that the voters have placed in me. My campaign is focused on one mission — creating healthier communities for everyone who lives and works in the 79th District.

“Although there are votes yet to be counted, I am eager to start that work restoring economic prosperity, expanding high quality health care, investing in education, and protecting our environment. There are innumerable tasks ahead to create an equitable and prosperous California, but together I know that we can achieve these essential ambitions.”

Weber is also an obstetrician and gynecologist who leads the Pediatric and Adolescent Gynecology Division at Rady Children’s Hospital-San Diego.

Contreras is the owner of Rancho Customs Brokers, which provides custom compliance and consulting services.

Leticia Munguia, the business representative for the American Federation of State County and Municipal Employees, District 36, which represents government employees across Southern California, was third with 8% of the vote, followed by Shane Suzanne Parmely, a teacher at Bell Middle School, with 5%.

Aeiramique Glass-Blake, a restorative justice consultant, activist and preacher who works in the juvenile justice field, was fifth with 1%.

Aeiramique didn't finish very well. HOWEVER - I don't think that should reflect poorly on Aeiramique and I'll tell you why I think so. I would wager that a lot of people, like me, who know and love her, also really like Weber (congrats!!!!). The two women share much of the same core constituency.

Not to detract from Weber's win, however. Not only was Dr. Shirley Weber arguably the most successful, influential and effective Assemblymember in the entire State of California over the last few years, but Dr. Akilah Weber has, from what I've seen (i haven't really been following La Mesa City Council but in what following it I did see was), a nuance (i love nuance in elected officials, it comes from being well-educated and brilliant, in my not so humble opinion), open mindedness and remarkably effective Socratic questioning style that really wins people over, if not necessarily to her position, at least respect with how she arrived at her conclusion, the same way I feel about Donna Frye. Whether you agree or disagree, their logic with arriving at their conclusion is sound and easy to follow. And sometimes she surprised me with her opinion, not always being what I would have guessed, which is super cool in my opinion, open-minded, tolerant and willing.

I hope Aeiramique isn't too discouraged with the result because she is a powerful advocate who has made and continues to make a huge positive impact in our community, and I just want to say she has a lot more support than her finish would suggest. If she becomes less active feeling sad about her finish, our community will suffer due to her disengagement, obviously an understandable reaction that should be respected, but I really hope she stays active and involved, or else our community will lose out on a bright and energetic ray of light, beacon of hope and information dissemination, that Aeiramique brings to our community.