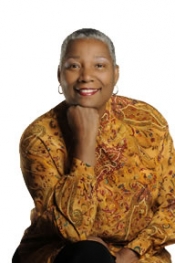 March 5, 2014 (El Cajon)- Dr. Carolle Jean-Murat, who has her own healing center on Mt. Helix and was born and raised in Haiti, was recently selected as one of 22 ‘Brilliant, Beautiful, and Brave Black Women’ and her profile is on display in the women’s museum in San Diego until March 28.

They had looked for women who did a lot for the community, and that is what Murat has done.  In an interview with East County Magazine, she provided more details into her efforts to help people in Haiti and here in our local communities.

Recently, she partnered with the San Diego Ambassador program to put on a sleepover, like a rites of passage for the girls and boys, on March 1. They have traveled to New York and Washington, and they hope to go to Haiti in 2015 and participate in Water for Africa with former member of the El Cajon Planning Commission Vickie Butcher in 2016. At the sleepover, Murat was given an award from the program.

Since coming to San Diego in 1982, she has worked with two Indian communities including the Kumeyaay Indians from Barona and Sycuan. As a thank you for her help with providing medical care, the Indians also gave her money to start an art and music program in Haiti.

She has also worked for the Rachel Center and St. Vincent De Paul.

“I was one of the founders of the Rachel Center for the Homeless Clinic [with Dr. Carla Fox] in 2001,” she recalled. “Since then, I started at St. Vincent De Paul in 1997. I also do volunteer work in El Cajon, Volunteers in Medicine. So, I’ve been doing free medical care with women who have no insurance. And I do things in other countries, including Haiti,” she said. “I’ve been doing a lot for the children.”

She has been visiting her native Haiti since 1999. She has helped rebuild homes, bring the kids to school, and she formed the Angels for Haiti project. “I help with the hospital whenever I can”, Murat added. They also have a school garden, where the kids can learn more about agriculture, selling the produce in the villages, and cooking from whatever they pick.

Angels for Haiti is a replica of what she does in San Diego. In 1993, she started the Health through Communications program in San Diego, where kids learn about art and music among other subjects.

“I feel if you give a child a brush or musical instrument, he or she will never touch a gun,” she told ECM. So then, they won’t be joining gangs, she believes. Her program in Haiti is called Angels for Haiti, a nonprofit.

Murat plans to go to Haiti March 15-25 with university students to give toys and other fun stuff, like pencils and earrings, to the children. The time she stays in Haiti varies, depending on the finances.

Murat got an email from the women’s museum about a month prior. “I felt honored.. I was glad that I was chosen.”, she exclaimed.  “Also, there were a lot of people I know. We worked together for many, many years, so it was like a sister reunion,” Murat added.

“They wanted to know your favorite quote.. and also who inspired me. I chose a quote from St. Theresa of Lisieux: ‘May you trust that you are exactly where you are meant to be.’ Murat quoted it, “I am at the right place at the right time.

The full quote is as follows: “May today there be peace within. May you trust God that you are exactly where you are meant to be. May you not forget the infinite possibilities that are born of faith. May you use those gifts that you have received and pass on the love that has been given of you. May you be content knowing you are a child of God. Let this presence settle into your bones and allow your soul the freedom to sing, dance, praise and love. It is there for each and every one of us.”

Matt Sybert, whose friend Murat helped out with, her been helping get her name out there. She is on Facebook and Twitter.

As far as what else readers should know about her, she said, “I’m very happy. All these past issues I’ve had, I was able to deal with them.. So now I’m in a stage where I’m content with what I have. I have accomplished many things in my life. I am blessed that I am sound of mind and I’m able to help a lot of people who are suffering.”

There is also a video about her at: http://www.youtube.com/watch?v=v6tmu2p1JtU.

Learn more about the Angels Project by visiting: http://www.angelsforhaiti.org/.

View the article specifically on the Angels Project: http://www.eastcountymagazine.org/node/5289.