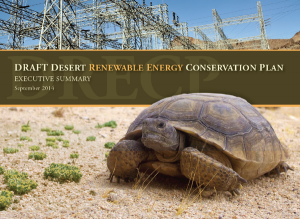 The draft DRECP proposes to protect some areas in the California desert important for wildlife, recreation and other uses while streamlining permitting to make it easier to build large-scale wind, solar and geothermal projects as well as transmission lines in areas deemed appropriate.

The draft DRECP is a renewable energy and conservation plan covering more than 22 million acres of lands in Imperial, Inyo, Kern, Los Angeles, Riverside, San Bernardino and San Diego counties.  According to a press release from the BLM, the draft is the result of collaboration among the BLM, FWS and two state agencies--the California Energy Commission, and California Department of Fish and Wildlife, as well as other stakeholders.

KCET TV reports that earlier drafts showed possible development focus areas (DFAs) in the ecologically sensitive areas of East San Diego. The Preferred Alternative excludes those areas from the list of DFAs, but KCET reports, “The BLM has reminded desert residents that the preferred alternative may well change before the final DRECP is released, possibly sometime next year.”

The plan, though just released, has already drawn concerns both from environmentalists and industry. See the 60-page summary: http://www.documentcloud.org/documents/1304035-desert-renewable-energy-conservation-plan.html

Here is the link to the entire draft DRECP: http://drecp.org/draftdrecp/

Terry Weiner with the Desert Protective Council, which has previously sued in an effort to half industrial solar on sensitive desert habitat, had this to say in an e-mail sent to ECM.  "DPC's attitude to this plan to carve up our CA desert for industrial solar is misguided.  The DRECP can be perceived as a subset of the Federal Solar Programmatic EIS.  It completely ignores the rooftop solar and brown fields alternatives and is as `wrong from the Start' as is  the Solar PEIS." She added, "People who believe we can `meet our renewable energy needs and conserve the desert' simultaneously are just plain deluded."

The plan "calls for 2 million acres of development focus areas and acknowledges in the back of the document unmitigatable impacts to scenic vistas near national parks and wilderness areas,” Basin and Range Watch states on its website.

Nancy Rader, executive director of the California Wind Energy Association, has said the California Desert Plan would hinder the wind industry with alternatives that don’t include new wind development zones in Imperial and Riverside County. "If climate change is an 'existential challenge,' as Governor [Jerry] Brown stated at the U.N. this week, then why is California aiming to put its best, carbon-free wind resources off limits?" Rader said, the Desert Sun reported. The Desert Sun (Palm Springs, Calif.) (tiered subscription model) (9/23)

Ileen Anderson with the Center for Biological Diversity issued a statement calling on the administration to give “"at least equal weight to providing new incentives for significantly increasing distributed solar power.” She adds, “Significantly increasing solar power close to the source of energy use such as rooftops, parking lots and community-oriented renewable energy projects is also critically needed to rapidly phase out fossil fuel energy and reduce emissions. Distributed solar is a win for climate change, clean energy and our treasured desert."

To facilitate public comments, a recorded informational webinar to help the public navigate the DRECP documents will be available beginning Sept. 29 at www.drecp.org. The webinar will include background information on the DRECP, including the plan's overall goals, the general content and structure of the plan and associated environmental analysis, and an orientation to the DRECP Gateway, a user-friendly map-based data sharing system. The webinar may be viewed online, and will be broadcast at the locations listed below.

Following the informational webinar, a series of public meetings will be held in late October and early November throughout the DRECP planning area and surrounding population centers. The intent of these meetings is to help public and agency stakeholders understand the draft plan and facilitate public input. The dates, times and locations of the meetings will be posted on the DRECP website at www.drecp.org.

The draft DRECP EIR/EIS is available for review and download at www.drecp.org, local libraries and agency offices, and a DVD will be provided upon request. To request a DVD, please send an email request to [drecp.info@energy.ca.gov] or call (916) 654-4818 with the mailing address. For a list of local area libraries and agency offices that have the document (most on DVD), please go to www.drecp.org/draftdrecp.

In addition to an online presentation, the webinar can also be viewed at locations in several cities. In San Diego and Imperial Counties, those locations are:

Please Note: The informational webinar being hosted at local Fish and Wildlife Service and Bureau of Land Management offices will take place on Oct. 9, 2014, from 4pm to 6pm.

The obliteration of the desert for the sake of an idea: now that is a textbook example of the power of ideology. How ironic that it would be conceived and carried out by those most vocally committed to nature's defense--i.e., progressives.