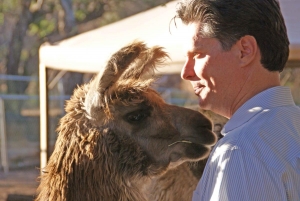 July 27, 2011 (Lyons Valley) – Llama rancher John Klacka knew he had to get help fast when he found his prized stud llama, Muneco, had been bitten by a rattlesnake on July 7. “He was foaming at the mouth and having trouble breathing,” he recalled. “I ran into the house and tried to call the vet—and my phone was dead. I thought `This can’t be happening.’”

Klacka has no cell phone service and even his Internet is dial-up, dependent on AT&T. With no phone service, he found himself in a communication blackout. By the time he drove miles to a store to make an emergency call and summoned a veterinarian to the property, it was too late.

Despite treatment with medications including steroids and antibiotics, the venom had spread too far. “He started to do a neck roll. Anyone who owns a llama knows it’s the worse thing you can ever see,” said Klacka, his voice choked with emotion. The llama collapsed, its airways swollen shut. The vet attempted an emergency tracheotonomy, to no avail. 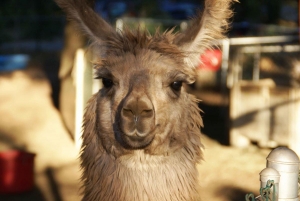 “We held him as he died,” said Klacka. “That was the worst part.”

Ironically, another llama on his ranch was previously bitten by a rattlesnake—but survived due to prompt medical treatment. Klacka blames AT&T for costing him valuable time due to the outage. “I lost half an hour because of the phone.”

This wasn’t the first time phone service has gone down at his ranch. Every neighbor has a story…every time it rains, we lose phone service and we crackle and pop.” The last time, , a bird nesting on a line caused an outage and it took AT&T three days to repair the line, he said.

AT&T has not returned his calls, or calls from East County Magazine asking for an explanation of the July 7 outage—or why it took six days to repair.

“That snake is still out here somewhere,” said Klacka, who fears next time, a member of his family’s life could be at stake.  The snake is not alone; this season Klacka says he's seen more rattlers on the property than in recent memory due to to increased rains and construction of Powerlink nearby that he believes may be driving snakes onto his property. He's sought to create snake-proof fencing, but snakes just tunnel under, he said, clearly frustrated at the danger of being left without communication the next time a crisis occurs.

Adding insult to injury, Klacka says an AT&T representative offered him a $6 credit on his phone bill for the “inconvenience.”  A supervisor has failed to return numerous calls.

“This was not an inconvenience. This was a tragedy,” said Klacka. He wants compensation for his loss—but says AT&T won’t return his calls to discuss the issue. A wildfire survivor who suffered major damage at his ranch, losing dozens of oak trees and fencing, he says he paid about $3,000 for the llama with a dream to launch a new business venture. 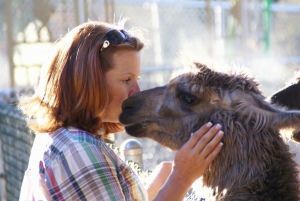 Because it had the “sweetest” disposition and was the descendant of a national champion llama, he chose the llama that later died of snakebite to be his prized stud animal and had other llamas on the ranch gelded. The llama could have generated stud fees of $1,500 to $2,000 for each stud service provided. But the loss is more than monetary.

“They’re more than pets…There is, was, something very special about this animal,” said Klacka of his lost llama.

Now, neighbors and residents in other backcountry communities have come forward to tell East County Magazine about problems they’ve had with phone service provided by AT&T in rural areas of San Diego’s East County.  Residents from Boulevard, Potrero, Campo, Deerhorn Valley, Jamul, and other areas have all complained of being left days or even weeks with no phone service and of unresponsive attitudes by AT&T employees toward the serious public safety risk that being left with no phone service creates, particularly in high-risk fire areas. 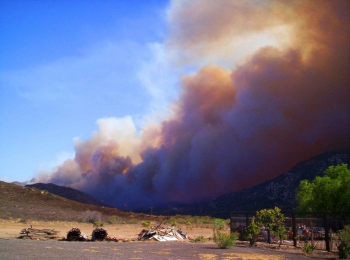 Kim Hamilton, editor of the Deerhorn Valley Antler, says she was left without land line phone service by AT&T for two months. Unlike Klacka, however, she has “spotty” cell phone reception.

“It took me one to two hours on the phone to convince them [AT&T] we had no phone service; often the cell call would get dropped and I’d have to start over with someone else,” she said. “Eventually someone discovered the mis-wiring; we got service back and a huge bill for two months and no phone service,” she said. “I complained, they reduced it by a couple hundred, and I paid just to be done with the issue.”

Seasoned journalist Billie Jo Jannen, host of the “TGIF Friday” news show on My107.9 FM radio, former editor of several backcountry news publications, and current "East of the Line" columnist for East County Magazine, said phone lines in poor condition were left on the ground for months after a fire in her Campo-area community.

"After the 2004 fire that started in Mexico and crossed in my neighborhood of Canyon City, our phone lines were crudely patched and left lying on the ground along Highway 94 for months after the fire,” she said in an e-mail to ECM. “Our quality was horrible and when it rained, you couldn't even keep a decent enough connection to use dial-up internet. In damp weather, you could barely have a conversation with anyone with all the hissing and crackling noises in the line.”

Despite numerous calls to AT&T repair, Jannen said she was never given a timeline to get the lines fixed. “This went on for months,” she said, adding that the line was finally repaired. “Their terrible maintenance, combined with their terrible customer service makes them last on my list of desirable providers. I would never voluntarily return to having ATT for my phone company."

ECM editor Miriam Raftery is a former AT&T customer. For many years, she complained to AT&T about problems with her phone line after rainstorms, when outages, static, and a crossed line with other voices audible occurred numerous times. AT&T was never able to diagnose or fix the problem. After finally switching to Cox Communications, when the next rain-related problem occurred, Cox found and repaired the problem within 24 hours, replacing a sagging overhead phone line.

Klacka now lives in fear of another phone outage. “That snake is still out here somewhere,” he said. “What we as a community want is to know that since we have no cell phone service, our lines are in good shape.” With million dollar homes just down the road, he is baffled as to why reliable phone service has not been made available in his neighborhood.

When Klacka heard that the California Public Utilities Commission was holding hearings to decide whether or not to allow AT&T to merge with T-Mobile, he expressed strong disapproval. While he hopes to someday see a cell phone provider offer service in his rural area, he concluded, “I can’t wait for the day when AT&T has some competition, so that I will have a choice not to use them ever again.”

Anyone wishing to provide written comments to the CPUC on the proposed AT&T merger with T-Mobile can send comments to public.advisor@cpuc.ca.gov and reference I1106009 – AT&T/T-Mobile Merger.

General complaints about maintenance or service of phone lines may also be sent to the same email. A CUC commissioner has advised ECM that the CPUC is planning to hold hearings on land line maintenance by telephone companies in California. She encouraged all residents with concerns to email public.advisor@cpuc.ca.gov with their complaints.