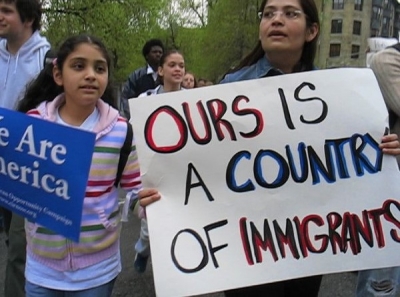 "Today we celebrate and tomorrow we will continue to fight because Trump's attacks on the immigrant community must end."

Credit to Common Dreams, under a Creative Commons share with attribution license

Chief Justice John Roberts joined the court's four liberal-leaning justices in the 5-4 decision, ruling that the Trump administration had not given sufficient justification for ending the Obama-era DACA program, under which about 27,000 young immigrants have worked as frontline healthcare workers during the coronavirus pandemic.

"Termination of DACA during this national health emergency would be catastrophic," immigration lawyers argued in court filings.

The Trump administration could feasibly make another attempt to dismantle the DACA program, threatening recipients—90% of whom work in the U.S. and many of whom have not been to their native countries in decades—with deportation.

Following the ruling, advocates vowed to fight any further attacks on DACA.

"We celebrate this ruling but our fight goes on," tweeted Rep. Pramila Jayapal (D-Wash.), who immigrated to the U.S. from India at the age of 16. "The Senate should immediately pass the American Dream and Promise Act."