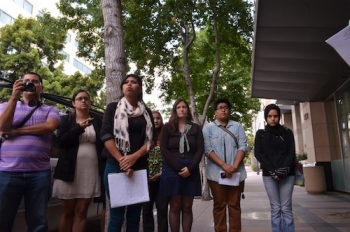 The Dreamers contend that Border Patrol used force to break-up a peaceful demonstration at Friendship Park on the U.S.-Mexico border.  They provided media with a video showing Border Patrol, U.S. Customs enforcement, trolley security personnel, and private contractors holding back a noisy crowd of demonstrators on July 28.

El Sol de Tijuana reported that Dreamers were planning to meet just across Playas de Tijuana, on the Mexican side, by standing at Friendship park. The newspaper quoted a member of Grupos Solitarios, an activist group, using the pseudonym Morgue Clandestina. He stated that “the intent was to go to the border, by the binational park, known as Friendship park, but the Dreamers did not obtain a permit from the Border Patrol.” http://www.oem.com.mx/elsoldetijuana/notas/n3069332.htm

At a press conference on July 29, Carolina Valdivia, who recently graduated from San Diego State University with a Masters in Sociology, said that “the San Diego Dream Team, part of the California Youth Alliance concentrated in a peaceful action at the San Ysidro border to demand justice for immigrant communities all across the United States.”

Valdivia said that it is time that Governor Jerry Brown signs the “Transparency and Responsibility Using State Tools” (TRUST) Act. This Act was revived by the legislature when it passed it again, after the Governor vetoed a previous version last fall. The Bill passed the Assembly on a 44-22 vote, and it is now on the way to the State Senate. 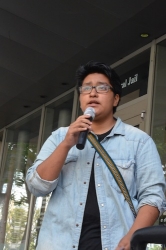 The Act would reduce cooperation between state police forces, including San Diego Police, for example, with ICE and other Federal agents in the effort to deport non-legal residents.

Valdivia, a Dreamer/child of an undocumented immigrant, said she has definitely benefited from the deferment in action signed by President Barack Obama, which allows her to continue her education at the University of Chicago. There she intends to pursue a Ph.D in social work. Others were not so lucky and would like to see this deferment extended to all immigrants who are not documented, since we have an immigration bill in the pipeline.

But despite peaceful protest intentions, demonstrators say that they were met with force. What exactly led to the confrontation, we cannot tell. But according to Karen Guzman, “What happened yesterday was a huge way of exposing the way we are daily treated by Border Patrol.”

She stated that they were treated roughly “in broad daylight with cameras.” She asked how does the Border Patrol treat people when cameras are not rolling?

She faulted deportation policies as harmful to families and wondered how her father was treated when he was deported, in the dark.

ECM also talked with Liza Arizona, who is a resident of City Heights and is working towards a teaching credential, and has taught in classrooms across many areas of the County where she also volunteers and mentors young students.

“I’ve seen students who have been deported in the middle of the night. I’ve seen them coming to school, having to deal with this trauma, not knowing where their family members are,” she told ECM. This leads to learning problems as well as depression, she said.

Moreover, many of these kids do not have access to medical care, and they have medical issues well beyond what the school nurse can deal with. She also mentioned the low pay their parents have, which leads to the kids not having the essentials, including pencils and notebooks.

Those at the press conference contend that the funds we will be spending at the border increasing the number of Border Patrol Agents, and further militarizing the border under legislation currently moving through Congress, could be best spent on social services and education.