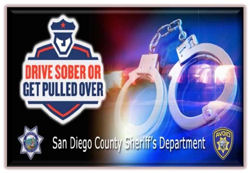 August 31, 2012 (San Diego County) -- The San Diego County Sheriff's Department is continuing its "Drive Sober or Get Pulled Over" campaign this Labor Day weekend. Deputies and officers from the CHP and 14 other law enforcement agencies will conduct extra patrols and DUI/Driver License Checkpoints.
August 31 – 6:00 p.m. to 2:00 a.m. – Encinitas, Santee and Poway
September 1 – 6:00 p.m. to 2:00 a.m. – Imperial Beach
September 2 – 6:00 p.m. to 2:00 a.m. – Santee (AVOID)
The nationwide crackdown in the final weeks of summer through Labor Day started August 17th and runs through September 3rd. As of Sunday, August 26th, 417 people have been arrested for driving under the influence of alcohol or drugs.
The Insurance Institute for Highway Safety says Labor Day weekend is the second most deadly day of the year on our roadways. A report released by the San Diego County Medical Examiner's Office in July finds 242 people were killed in car crashes in the county last year. Nearly half of those killed or 45% were under the influence of alcohol.
"By joining this nationwide effort, we will make the county's roadways safer for everyone throughout the Labor Day period.” says Sheriff Bill Gore. "If you've had too much to drink, don't even think about getting behind the wheel. Driving impaired is simply not worth the risk. Remember, we will be out in force and we will be watching, so Drive Sober or Get Pulled Over.”

Funding for this operation is provided by a grant from the California Office of Traffic Safety, through the National Highway Traffic Safety Administration.