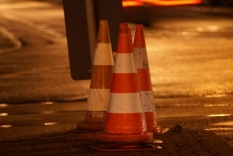 He struck a 27-year-old construction worker who was directing traffic, says Officer Travis Garrow with the California Highway Patrol.
The worker, a San Diego resident, was transported via ambulance to Sharp Memorial Hospital in San Diego, where he died of major injuries. He was employed by a subcontractor of Cal Trans.
Patton was booked into County jail on charges of felony DUI causing injury or death and gross vehicular manslaughter.
The identity of the victim will be released by the medical examiner after notification of family.
The California Highway Patrol is investigating this accident.