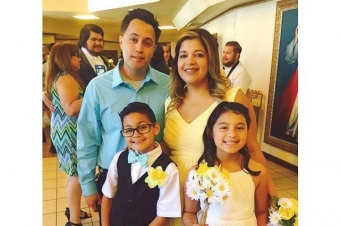 March 28, 2018 (Boulevard) – The Medical Examiner’s office has released the identity of a San Diego driver found dead last Sunday morning in a car that had plummeted into a ravine off Interstate 8 near McCain Valley Road in rural Boulevard.

Franky Martinez, a 31-year-old, married father of two young children, was not wearing a seatbelt and was thrown from his vehicle as it crashed down a boulder-studded slope. The California Highway Patrol believes he lost control and swerved, then tumbled down the hill.

The victim’s family had called 911 Saturday night to report him missing when he failed to return home.  Early Sunday morning, a passerby discovered the crash and flagged down a Border Patrol Agent, who found Martinez’ body.

The County Medical Examiner concludes that he died of a blunt force injury to his neck.

A Go Fund Me Page set up by the family states that Martinez and his wife, Arleen, were high school sweethearts and that Franky Martinez was the sole support of his family. The site remembers him as a “devoted father who once worked three jobs to provide his kids with a safe and loving home in San Diego,” adding, “Franky always wanted his children to grow up with opportunities that he didn’t have.”