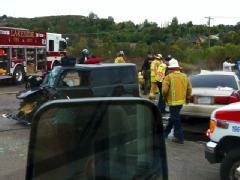 “How many more children are going to have to die before we get a high school in Alpine?” – Rose Urdahl, Alpine resident

November 10, 2011 (Alpine) – A double tragedy has struck an Alpine family. This morning, Granite Hills High School student Devon Sambhi was ejected and killed in a roll-over accident. He would have been 17 on November 22.  His mother, Natalia Sambhi,  was air-lifted to a hospital.  She was driving rolled off I-8 and landed on Old Highway 80 at Dunbar Lane. According to CHP, a tire problem may have caused the crash.

Now Sambhi's father, Sunil Sambhi, has died following a second accident close to the location where his son lost his life.

This afternoon at 1:15 pm., California Highway Patrol responded to calls of a wrong-way driver traveling at a high-speed on I-8 eastbound in a Scion. At 1:30, the driver collided head-on with a 20000 Mercury Grand Marques  west of Tavern Road.  The wrong-way driver was air-lifted to a hospital, but later died, 10 News reports. He has been identified as Sambhi's father,  per California Highway Patrol Officer Brian Penning, who said the crash is being investigated as "a deliberate act."

Two other victims were taken to a hospital by ambulance, Alpine Fire Chief Bill Paskle told ECM. Officer Penning has identified them as Marco Caro,44, of Heber California, and his 19-year-old son. Both suffered moderate injuries.

“This is one of the big reasons we wanted a high school in Alpine, so that no more kids would be killed. Our deepest sympathies go out to the families. This is what happens when the Grossmont Union High School District board fails to live up to its responsibilities,” former GUHSD board member Larry Urdahl told East County Magazine.

His wife, Rose echoed those sentiments. “How many more children are going to have to die before we get a new school in Alpine?” she asked.

The Urdahls said that three Alpine students at Granite Hills were killed when their daughter was a student there, in multiple accidents. A teen boy form Alpine died from an accident while traveling to Steele Canyon High School. Yet another Alpine teen was killed in the highway between Alpine and Crest.

Despite two bond measures in which Alpine residents voted to approve tax increases to fund a new high school, construction has been put on indefinite hold due to budget cuts.

“I’m angry that we’ve been lied to for so many years over the Grossmont Community. I was one of the first five who started the original Alpine High School Citizens Committee back when my grandson was in kindergarten…We have kids dying every year in Alpine, and we have two dangerous roads.”

He also wants to see driver training reinstated in schools and the minimum age raised for licensure. His grandson had a driver’s license for just two weeks when he ran onto the shoulder. “He jerked the wheel hard left and the vehicle just flipped,” Taylor recalled, adding that with more experience or training, young drivers could learn how to react to emerency situations, saving lives.

Correction:  An earlier report contained inaccurate information on the condition of Mrs. Sambhi, based on erroneous information received by ECM.  Fortunately, she is recuperating and today was discharged from the hospital.

Trying to tie this incredible tragedy to no high school in Alpine? Really?? Couldn't work in the Powerlink as a contributor, huh?

The teen died because he was not wearing a seat belt; people wearing seatbelts go to the hospital (and are subsequently released, as reported); those who choose to not wear seatbelts are ejected in high-speed rollovers and usually die on scene.

By your logic, if the mother and son were traveling to Parkway Plaza instead of Granite Hills HS, the underlying cause of this tragedy would have been the fact that Alpine has no enclosed shopping mall.

Journalism? Not even close!

FACT: A student who lives in Alpine is dead, killed while traveling to school far away after Alpine families have repeatedly pleaded for a school in thir area to prevent deaths such as this one. If he was NOT traveling outside Alpine to school, he would be alive today.

Government does not owe students a shopping mall. It arguably DOES owe them a safe place to attend school without taking lives in hands to get there.

Would the boy be alive if he'd had a seatbelt securely fastened? Maybe.  We will never know. Certainly parents should take a lesson from this and make sure their children wear one.

But it is definitely the responsibility of media to examine the deeper context behind a tragedy such as this.  Serious accidents to teens and their parents are more apt to happen the more often they have to drive to school or after-school events far away.

School board members knew of the past deaths and chose to keep endangering the children of Alpine by refusing to build the school. So yes, the public has a right to know that their public officials' vote has serious consequences--and the media has an obligation to tell readers the truth.  The district had budget woes and has attempted to justify its actions. But those actions had deadly consequences.

I am amazed to hear anyone attacking us for discussing this very serious issue in a responsible fashion.  Are you one of those school board members who voted against the interests of Alpine families?

Incidentally other reputable media outlets also made the connection between the board's actions/no Alpine High School and this latest tragedy.