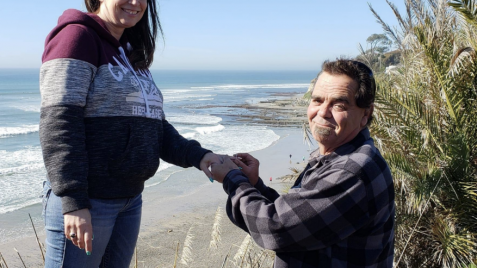 By Miriam Raftery
Photo courtesy ECM news partner 10 News
August 7, 2019 (Lakeside) -- Steven Johnson was set to be married this Saturday, beginning a new life with his fiancée, Karlene Moen. Instead, his grieving family and friends will be holding a celebration of life in his memory. Johnson, left brain-dead after a motorcycle crash, is set to be removed from life support.
Now his loved ones are asking for public help to find the woman driving a gray compact car, who fled the scene of the accident. The crash occurred last Friday morning around 5:30 a.m. on southbound Highway 67 near Willows Road in Lakeside, 10 News reports.
Johnson, a father of six and a grandfather, was on his way to work when the accident occurred. He called his fiancée and described the motorist who he said cut him off, causing him to crash, and even posted photographs of his injured leg on Facebook. He said the woman’s gaze met his, but that “She just left me laying in the road,” he told Moen.
A short time later, his chest began to hurt.  He underwent emergency surgery for a torn aorta. Sunday morning he suffered a heart attack and was revived, but had suffered severe brain damage due to the lack of oxygen.
Johnson’s organs will be donated to help others live.
His daughter, Sami Johnson, implores, “Who could leave my dad in the road?”
His would-be bride says she wants justice, adding, “I’m heartbroken. He was my everything.”
Anyone with information on the crash is asked to call the California Highway Patrol at (619) 401-2000.