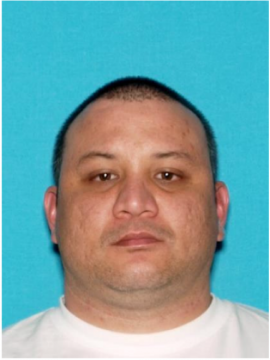 Officers were responding to a call of a parked vehicle obstructing a roadway. They attempted to awaken two people sleeping inside.  Pangilinan presented a false ID, then attempted to drive off with Officer Cirello partially in the vehicle. The officer was dragged a substantial distance and then struck by another vehicle.

Officer Cirello, who has served with the department since 2010, was hospitalized in critical condition but has since been released and is recovering at home.
Pangilinan and his passenger, Keani Flores, 28, fled the San Diego area. On  December 21, Flores was arrested by the U.S. Marshal's Fugitive Task Force and ECPD detectives in Oakhurst, CA. According to ECPD, she is believed to have actively participated in the assault, but ECPD has not disclosed what charges have been filed against her.
Pangilinan was spotted in the Oakhurst area by officers, but fled when officers attempted a traffic top.  A felony arrest warrant was issued for Pangilinan, who was described as dangerous before being taken into custody in Los Angeles.
Lt. Randy Soulard, public information officer for ECPD, thanked numerous agencies that helped in the investigation including the Los Angeles Police Department, The U.S. Marshal Regional Fugitive Task Force, The Fresno Police Department, the California Department of Corrections, and the Riverside County Sheriff’s Department.
“The El Cajon Police Department would also like to thank the community for their continued support for Officer Cirello and his family, and for the thoughts and well-wishes for his recovery,” says Lt. Soulard.