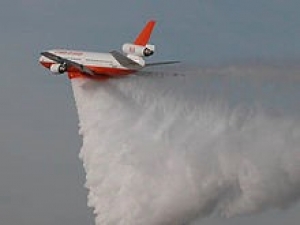 June 26, 2015 (San Diego)—With wildfires raging across California, an unmanned hobby drone interfered with firefighting aerial drops yesterday on the Sterling Fire in San Bernadino Fire.  According to CAL-FIRE Captain Kendal Bortisser, this is the second time in two days that a drone has halted air drops. The near-misses have prompted CAL-FIRE to issue this stern warning to hobby drone users: “If you fly, we can’t!”

He adds, “A collision with a hobby drone could easily result in major damage to firefighting aircraft, injuries to the pilot and crew on board as well as firefighters below, and worse, a midair collision. It is unsafe for unauthorized drones to be flown anywhere near a wildfire.”

The Los Angeles Times reports that an air tanker laden with over 10,000 gallons of fire retardant was forced to turn back from the Lake Fire due to the drone, as did two smaller planes that had to dump their loads of water elsewhere because it was too heavy to land carrying them. As a result, the fire swelled to even larger proportions and is currently at nearly 30,000 acres, only 19% contained.

As of today, nearly 3,300 firefighters remain on the front lines of five large active wildfires burning in California.  The good news is that the Corrine Fire in Madera County is 100% contained at 920 acres. The bad news is that several other major fires continue to rage, with a red flag warning in effect across much of northeast California due to high heat, strong winds and potential for lightning fires. Learn how you can take action to be prepared for wildfires at www.ReadyforWildfire.org.

Here are updates on the fires still burning: