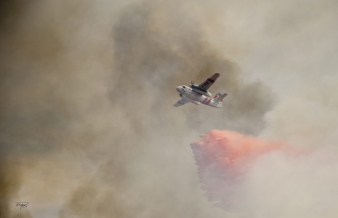 July 10, 2017 (San Diego's East County) - Hobbyist drones are a growing safety concern among local first responders fighting fires in the air and on the ground.

“Very simply put: If you fly, we cannot fly,” said Tony Mecham, County Fire and CAL FIRE San Diego Unit Chief. “One of the most effective tools we have in the early stages of a fire is the use of aircraft. And when people fly drones, I do not think they understand the impact this has on the fire agencies. We have to pull all fire aircraft out of the area until we can find the drone owner to land the drone.”

State law makes it a crime to impede firefighting and other emergency activities by flying a drone at the scene of any emergency. It is also a crime to interfere with, or disobey the lawful orders of, firefighters or emergency rescue personnel who are responding to or fighting a fire.

For a whole hour recently, a drone disrupted the response to a brush fire near Camp Pendleton. The fire charred a canyon near a mobile home community, and only ground crews could work the scene. A drone had forced two firefighting tanker planes and two helicopters to divert to a nearby airstrip after ground fire crews. When fire crews determined that the drone no longer posed a risk, the tankers and helicopters continued working on the fire.

In this case, grounding the aircraft did not result in structure loss or in any injuries or deaths. But in a different situation, the fire might have spread and burned toward those homes.

Firefighting aircraft such as air tankers and helicopters often fly at low altitudes in the same airspace that hobby drone operators might use, putting pilots at risk for a midair collision.

That was certainly the case on the Camp Pendleton area fire, said CAL FIRE Battalion Chief Burke Kremensky, who coordinated the air attack on that fire. He said none of the fire aviators working the fire ever spotted the drone but crews on the ground saw it flying about 200 feet off the ground, the same altitude where helicopters operate. Tankers also fly that low when dropping fire retardant. In fact, the drone was seen hovering over the retardant line dropped earlier by the tankers.

“Even in the best environment, drones are really, really hard to see,” said pilot Tim Johnson, who flies with the Sheriff’s Aerial Support to Regional Enforcement Agencies (ASTREA). ASTREA partners with CAL FIRE to make water drops during fires.  “In a fire, there is smoke and multiple aircraft in the area and it’s difficult to see them.”

CAL FIRE Capt. and Public Information Officer Issac Sanchez said there is a risk the drone could crash into the front windshield or hit a rotor blade, causing a catastrophe for an aircraft and for people on the ground.

In the end, fire agencies are not going to take that risk with their pilots and firefighters.

“It’s taking a very valuable tool away from the firefight and allowing the fire to grow,” said Sanchez.

Kremensky said that in this particular fire, the retardant was the most effective tool in stopping the flames from burning to the mobile home park.

“It’s very frustrating when we’re trying to contain this fire and keep it as small as possible and you can’t do your job because there’s somebody down there who is ignorant about the rules,” Kremensky said. “Taxpayers expect this from us. And you know the bigger the fire gets, the less likely you are to be able to control it.”

CAL FIRE created this public safety announcement to remind people that when drones are up in the air over a fire, firefighters will have to land their aircraft.