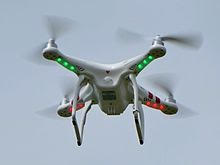 February 2, 2015 (San Diego’s East County)--The Federal Aviation Administration is reporting approximately 200 close calls in the past year between aircraft and drones.  That includes two  cases  of drones flying too close to airport runways in San Diego County – one in East County near Gillespie Field in El Cajon and a second in Carlsbad.

Now one San Diego drone maker and seller has devised technology to help solve that problem, 10 News reports.  EZ Drone  has devised software called geo-fencing technology.  Using GPS, it maps a circle around airports and  will disable drones that cross the line to prevent them from endangering planes.

The FAA is issuing warnings to offenders while it finalizes new rules that should be in place by year’s end.

U.S. Senator Chuck Schumer has called on the FAA to crack down on drones after two near misses at Kennedy International airport in New York and another New York airport where a flight carrying President Barack Obama had recently landed.

Senator Schumer called the near-misses “scary” and likened the situation to the Wild West, adding, “It must stop.”