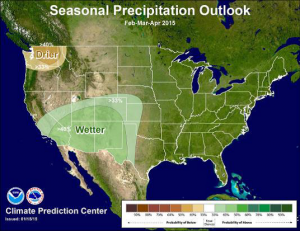 January 20, 2015 (San Diego’s East County) –The National Weather Service has issued a Drought Report following the recent rains. While the winter storms have brought some relief, water supplies remain low, though the situation may ease in coming months.

2014 was a year of record warmth from January through December.  The last 36 months is the driest period on record in California’s history – 21 inches below normal rainfall levels.

The outlook for winter and spring 2015 predicts warmer than normal conditions, but the good news is that periods of precipitation approaching near-normal or slightly above normal precipitation are forecast for Southern California.

The bad news is that due to the ongoing historic drought, the fire danger is significantly above normal across most of California. Over the equatorial Pacific Ocean, average sea surface temperatures are expected to warm into an El Nino state by early winter. The resulting weather pattern is expected to bring an increased southern storm track to impact southern California. Historically, only the strongest El Ninos have resulted in above normal rainfall for southern California, however.

Currently, California’s water supply is still just 35 to 50 percent of capacity -- nearing all-time lows.  The diminishing water supply combined with the past three years being the driest on record, have led to the extreme drought conditions.

California would need about 150 percent of average rainfall during the rainy season, October to April,  in order to significantly reduce the drought  and raise the low water supply in reservoirs, also bringing soil moisture to near normal levels.

December 2014 was wet across most of the state, bringing rainfall above normal. Since October, most areas in the state are ranging from 75 to 125 percent of normal. Rainfall levels.