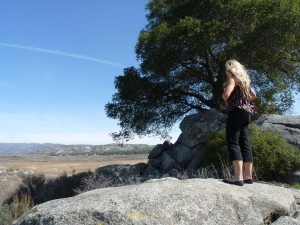 Photo: Once brimming with water, the eastern portion of Lake Morena is bone dry.

April 9, 2015 (San Diego’s East County) – The drought is shrinking ponds and lakes across East County—and Cal-Fire is concerned about the loss of water for fighting fires.

Barrett Lake has shrunk from 96 percent of capacity in 2006 to less than 6 percent.  Lake Sutherland is at 8.5 percent capacity and Lake Morena, a reservoir drained intentionally by the city of San Diego for drinking water, is below 3 percent of its capacity.

While many rural residents do have water tanks and hoses to help firefighters on the ground battling blazes, helicopters rely on natural water sources and reservoirs to scoop up water for fighting wildfires.

With tinder-dry brush across the backcountry in this fourth season of historic drought, lack of water only exacerbates an already serious situation.

Well, ( No pun intended ) maybe Cal Fire will finally use the 7500 gal. plus tanks the County made us put in to build in the back County? Their policy in the past is not to use them as they do not want the liability if they break something. STUPID!