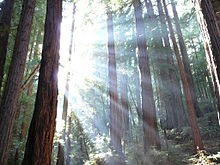 May 26, 2015 (San Diego’s East County) – Stands of coastal redwoods have occupied California for millions of years. But now these towering giants are under threat following four years of drought and now, state mandates for cities to cut water.

The community of Glendale has cut down 15 of its redwoods in Verdugo Park in the past month, the Los Angeles Times reports, and many more are in danger.

Northern redwoods are not at risk, such as those in Big Sur or California’s north coast, according to University of California Berkeley professor Ted Dawson, who’s been studying impacts of the drought on California’s native redwoods. But in more southern areas, the redwoods are being pushed to extremes, he says.

That includes landmark redwoods at Cal Tech in Pasadena and Carbon Canyon Regional Park, where arborists are struggling to save a grove of 241 coast redwoods, a senior park ranger told the L.A. Times.