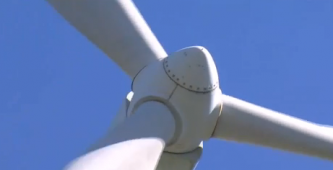 Could Vestas' fire-prone turbines be installed in East County?

October 31, 2013 (Netherlands) – Two young mechanics, ages 19 and 21, died when a fire broke out in a wind turbine where they were performing  routine maintenance.  The tragedy occurred at Deltawind’s Piet de Wit wind farm in the Netherlands, but highlights the hazards associated with fires caused by wind turbines.

According to the Netherlands Times, “because of the height, the fire department initially had trouble extinguishing the fire in the engine room.”  The fire started in the afternoon, but it took until evening for a special team of firefighters to arrive and ascend with a large crane.

One victim was found on the ground beside the wind turbine; the other body was recovered by the specialized team.   Two other mechanics escaped safely.  A witness reported seeing two men jump through flames into a staircase.

Cause of the fire has not yet been determined, but Deltawind has suggested a short circuit could be the cause.  The turbine was a 1.75 megawatt Vestas V-66.  Troublingly, these turbines are being sold by secondhand dealers online to buyers who may have no knowledge about the potential fire hazard.

Tule Wind, an Iberdrola project has been approved by Supervisors and the federal government for construction in McCain Valley near Boulevard in East County.  That’s a cause for concern among firefighting experts, since aerial drops by firefighting planes can’t be done above 500-foot-tall turbines (fire drops work best at 100 to 350 feet), nor can firefighters be put at risk to battle blazes beneath whirling blades hurling off burning debris. Moreover, Boulevard’s fire station has been closed most days over the past three months.

But who is going to protect the safety of campers, hikers, or residents near the recreational area if a wildfire starts at Tule Wind?  (Even in a best case scenario with turbines that function properly, there is still increased risk of fire due to towering turbines attracting lightning strikes, as has also happened at wind facilities around the world. View a photo, posted on the Weather Channel.) Is putting hundreds of lightning rods up across fire-prone East County, where some storms have caused over a thousand lightning strikes in a single weekend, really a good idea?

Iberdrola has purchased Vestas turbines at some of its other projects.

Iberdrola also has an agreement to purchase at least half of its turbines through 2022 from Gamesa, another company with a track record of turbine fires, as ECM previously reported.  http://www.eastcountymagazine.org/node/10644

Gamesa has had at least five legal actions filed against it involving U.S. wind projects over warranty disputes for hefty repairs and lost production.  That includes  $34.5 million in turbine repairs at the Kumeyaay Wind Farm in on the Campo Indian reservation locally.  A witness told ECM that he saw a blue flash that radiated out through the wind farm during a storm in December 2009 before the project went dark.  All 75 blades on all 25 turbines were replaced and the facility was offline for three months.  (View court documents). Gamesa blades suffered from “design and manufacturing defects,” the suits allege, Recharge News has reported.

San Diego Supervisor Dianne Jacob has voiced grave concerns over fire dangers posed by wind turbines in our backcountry, but other Supervisors ignored the fire risks, pushing through approve of the Tule Wind project as well as a County wind ordinance that opens up more rural areas for wind energy development. Yet these remote communites lack specialized firefighting forces such as the team used to ultimately quell the Netherlands wind turbine fire – and in on many days lately, have no fire station open at all, fueling growing safety concerns among residents.

Respecting others' viewpoints comes first with being educated about the industry that was the focus of the article regarding turbine fires. With 7+ TW of power being consumed daily world wide from all  power sources and 72+ TW available from wind potential alone world wide, to assume that wind energy would not be developed fully to reduce our consumption of hydrocarbons and emmission of greenhouse gasses is about as far out as interstellar travel. We are simply too far away from the next best idea in energy to do without renewable energy sources that provide the kind of power demand necessary for human persistence on the planet.

I often wonder how people who complain about the sight of turbines and that they supposedly devastate flora and fauna (better get rid of your cat) accommodate their willingness to live in overpopulated rural areas such as your region, where the simple presence of people has impacted the environment and the landscape more that even a hundred thousand turbines ever would. It's easy to shrug off the notion that the human challenge of protecting the environment with clean energy created by sources other than coal, natural gas and other consumables (that impact biodiversity and sustainability negatively) when you're escaping to your wilderness retreat in your hybrid car - or SUV as is more likely the case.

Rather than bloviate from an extreme point of view because it sounds good, get educated about how energy and environmental systems actually work together in a complementary way. Only then will serious people be able to sit down with each other and understand that it's not always about money, but about right things done rightly. That's the only way to get from competitive positions to common ground and to design the kind of infrastructure that meets our demand for power and a quality environment. I won't defend those companies and municipalities that don't maintain things they make money off of in a way that keeps them safe and reliable, but as an educator who does know better, to openly take the position that turbines are inherently dangerous is faulty logic. Perhaps you should be advocating that the wind industry must have a well-trained and well-monitored workforce, so that unnecessary events like the one described become less likely to occur.

In any case, turbines are here to stay, and yes, they are improving in safety, reliability and maintainability every generation. This article is an illustration of how far both the industry and lay people need to go to reach the point where the finger pointing stops and the real work of collaborating for common good and a better future for posterity starts.

Yes, big money and the utterly ruthless political ideology behind it. The federal and State governments have, with our tax dollars, mobilized their formidable resources behind a massive, single-minded effort to pave-over vast tracts of open wildlands with expensive, inefficient, land-destroying, flora and fauna killing, wind and solar farms. Naturally, those who believe they can gorge themselves at this new public trough begin to line-up behind them.

When $$$ talks, facts don't seem to matter anymore - even if it leads to the loss of life of people, wildlife and habitat.   If they did, wind farms wouldn't be allowed as they are now.

Many public areas in our beautiful back country will lose their recreational appeal to people like my husband and I because of the possible dangers from malfunctioning wind turbines looming over us.   It would be hard to quickly escape an unexpected fire from nearby wind turbines, power lines or substations in areas like McCain Valley or the Pacific Crest Trail, for instance, not to mention our wilderness areas.

Besides that, they destroy the reason why we enjoy those places in the first place.