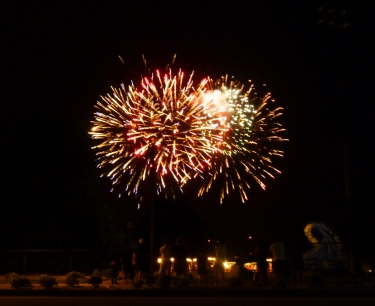 November 22, 2020 (Santee) -- Santee will celebrate its 40th birthday Dec. 1 at 7 p.m. by holding simultaneous fireworks displays at two sites, allowing residents a chance to cheer themselves while staying safely apart.

City officials said they had more expansive celebration ideas a year ago to mark the city’s official inception on Dec. 1, 1980 including musical concerts and other events that would attract lots of people, but then COVID-19 intervened, making those plans inappropriate.

Yet, they were still intent on finding a way to host some kind of community party without bringing masses of folks together, which could result in what’s been called “a super spreader event.”

The July 4th fireworks this year were a big hit with many residents, a good number of whom could view the displays from their homes, or at a nearby location where there weren’t any crowds.

City Manager Marlene Best said in addition to the evening aerial blowout, the city has arranged with about a dozen local retailers to hand out official birthday sweets, which will be distributed all day while supplies last.

A complete list of the retailers is posted on the city’s website, www.cityofsanteeca.gov, but include such well known outlets such as Mary’s Donuts, The Coffee Corner, and The Cupcake Store.

There will also be upbeat, pulsating music to accompany the fireworks that watchers can access via a city website link to be posted before the event, said Marketing Manager Bree Humphrey.

Santee budgeted $25,000 for the birthday celebrations last year, but fireworks aren’t cheap, and it needed another $5,000 to pay for the festivities. That came from a donation from Waste Management Inc., the city’s contracted trash and recycling vendor.

The fireworks provider hired by the city is Fireworks and Stage FX America, the same company that has been conducting the July 4th displays for Santee since 1998, according to a city staff report.

Some people can't even see the fireworks from their homes. There's no reason people can't park in the parking lots and watch, even if they sit on the hoods of their cars. Everyone should go and watch as they would normally, bring a sign, write whatever you want. It will be a protest. Protest for the ages.
Happy Birthday Santee!!!!