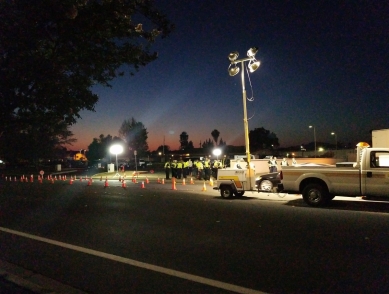 June 29, 2017 (El Cajon) – A DUI/driver’s license checkpoint in El Cajon on June 24th resulted in zero arrests.  Around 20 law enforcement personnel from El Cajon Police Department, including officers as well as five cadets and five senior volunteers, participated in the checkpoint in the 1400 block of East Washington Avenue from 8 p.m. to 1:30 a.m.

Of 472 vehicles stopped, 23 cars were pulled over for secondary inspections and one field sobriety test was administered.  No arrests were made for suspicion of drugs or alcohol, or any other criminal charges.  Ten drivers were cited for miscellaneous violations and five vehicles were impounded, Lieutenant Steve Kirk reports.

Checkpoints are placed in locations that have the greatest opportunity for achieving drunk and drugged driving deterrence and provide the greatest safety for officers and the public.  High Visibility Enforcements, which include DUI/Drivers License checkpoints, have been shown to lower DUI deaths and injuries.  A major component of these checkpoints are the deterrent effects it has on those who might drive alcohol or drug impaired, bringing about more awareness and encouraging everyone to use sober designated drivers.

Monica Zech, public information officer for El Cajon, says it’s not uncommon for as many as 30 law enforcement officers to participate in DUI checkpoints.

Drivers are encouraged to download the Designated Driver VIP, or “DDVIP,” free mobile app for Android or iPhone.  The DDVIP app helps find nearby bars and restaurants that feature free incentives for the designated sober driver, from free non-alcoholic drinks to free appetizers and more.  The feature-packed app even has social media tie-ins and even a tab for the non-DD to call Uber, Lyft or Curb.

Studies of California drivers have shown that 30 percent of drivers in fatal crashes had one or more drugs in their systems. A study of active drivers showed more tested positive for drugs that may impair driving (14 percent) than did for alcohol (7.3 percent).  Of the drugs, marijuana was most prevalent, at 7.4 percent, slightly more than alcohol.

Drivers caught driving impaired can expect the impact of a DUI arrest to include jail time, fines, fees, DUI classes, license suspension and other expenses that can exceed $10,000 not to mention the embarrassment when friends and family find out.

El Cajon PD will be conducting another DUI/Driver’s License Checkpoint and DUI saturation Patrol in the coming months in an ongoing commitment to lowering deaths and injuries upon our streets and highways.

The checkpoint was funded by a grant from the California Office of Traffic Safety, through the National Highway Traffic Safety Administration, reminding everyone to “Report Drunk Drivers – Call 9-1-1.”