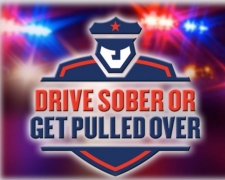 Drive Sober or Get Pulled Over This Holiday Season: National Enforcement Campaign Through New Year’s
December 20, 2019 (El Cajon ) -- El Cajon Police Department encourages everyone attending holiday parties and gatherings where alcohol may be involved to use a designated sober driver.
This holiday season, from now until New Year’s, El Cajon Police Department will have more officers on patrol looking for drivers suspected of being under the influence of alcohol and/or drugs.
In addition, El Cajon Police Department will hold a DUI/Driver’s License checkpoint tonight, December 20, 2019 from 8:00 p.m. to 2:00 a.m. in the 1400 block of east Washington Avenue in El Cajon.
“Unfortunately, this time of year is when we see more people driving impaired,” Sgt. Steve Paz said. “There is no excuse for driving after drinking or using drugs that impair. There are many ways to get home safely without driving.”
El Cajon Police Department reminds the public that impaired driving is not just from alcohol. Prescription medications, over-the-counter drugs and marijuana can also impair, especially in combination with alcohol and other drugs.
So if you are hosting a holiday party, offer non-alcoholic drinks for designated sober drivers and monitor how people are getting home. If someone has been drinking and tries to leave, offer to have them stay the night or take ride-share home.
Funding for this program is provided by a grant from the California Office of Traffic Safety, through the National Highway Traffic Safety Administration.