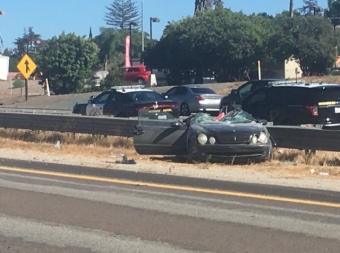 Update September 22, 2018: The victim has been identified as Melanie Alexandra Feliciano, 24, who died of blunt force injuries to her head and neck, according to the San Diego County Medical Examiner.

September 20, 2018 (Spring Valley) – Rene Ruiz, 27, has been arrested after fleeing the scene of a fatal crash that occurred on September 17th at 1:50 p.m. on State Route 94 in Spring Valley. He has been charged with felony manslaughter with gross negligence, felony hit and run, and felony driving under the influence of drugs.

According to the California Highway Patrol, Ruiz was driving a 1999 Mercedes with two passengers, a 22-year-old La Mesa woman and an unidentified female seated unrestrained on the center console between the driver and passenger seats.

Ruiz lost control and the Mercedes veered across the lane onto a dirt shoulder, where it struck a guard rail.  “The impact caused the Mercedes to become airborne, at which time the roof of the vehicle was crushed,” says Officer Travis Garrow. The vehicle then came to rest on its wheels on the westbound shoulder of the highway.

After the collision, Ruiz and the  La Mesa woman, who was in the right front seat, exited the vehicle and fled on foot, leaving the unidentified victim trapped in the vehicle.

She was extracted by fire personnel and transported to Sharp Memorial Hospital in San Diego, where she was pronounced dead.

CHP and the Sheriff’s department personnel set up a perimeter. At 2:45 p.m., they found Ruiz and the passenger hiding in a canyon near the collision site.