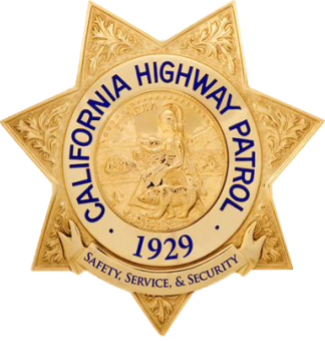 East County News Service
August 14, 2019 (Lemon Grove) – A California Highway Patrol officer hit by a suspected drunk driver last night near Lemon Grove suffered moderate injuries but expected to make a full recovery, says Officer Travis Garrow with the CHP.
Officer Robert Stevens had entered State Route 94 east from Kelton Ave. after clearing a road hazard when he saw a Nissan Altima straddling traffic lanes, with a damaged hood obstructing the driver’s view.  Officer Stevens passed the Nissan and pulled onto the shoulder to make an enforcement stop. As he stood on the shoulder, Ector stopped behind the officer’s patrol vehicle.
“Officer Stevens exited his patrol vehicle to contact the driver of the Nissan. The driver accelerated forward directly at him,” says Officer Garrow. “Officer Stevens took evasive action to avoid being struck by diving onto the trunk of the patrol vehicle. The Nissan struck Officer Stevens on his lower extremities. The Nissan continued forward and struck the driver’s side door of the patrol vehicle before fleeing the scene.”
Officer Stevens notified dispatch of the incident and the location the Nissan was traveling. An additional CHP east of the incident observed the Nissan pass their location at speed of 15 to 20 mph and initiated an enforcement stop. Eventually, CHP Officers were able to get the driver of the Nissan to stop near Lemon Grove Ave.
“During the investigation, Mr. Ector exhibited signs and symptoms of alcohol intoxication,” says Garrow.  Ector was evaluated and arrested DUI causing injury and felony hit and run.
Ector’s friend, Laresha Gist, 26 of Lemon Grove drove to the scene in her Pontiac G6. Officers noticed signs of alcohol intoxicate so she, too, was evaluated and arrested for DUI.