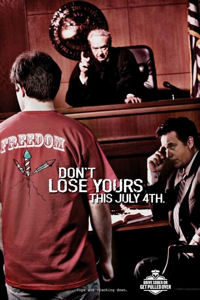 July 3, 2012 (San Diego County) -- Most Americans may not realize it, but the Fourth of July is one of the deadliest holidays of the year due to alcohol‐impaired driving crashes.
That’s why this Fourth of July the Avoid the 14 DUI Task Force is stepping up enforcement efforts as part of the ongoing “Drive Sober or Get Pulled Over” enforcement crackdown to catch and arrest impaired drivers who put themselves and others at risk.
“The Fourth of July is one of the deadliest holidays due to an increase in impaired‐driving fatalities,” said Sheriff Bill Gore.  “Too many people die behind the wheel each year due to those who choose to drive after drinking, so we will be out in full force this Fourth of July showing zero tolerance for impaired drivers.”
The DUI Task Force plans to deploy DUI Saturations Patrols starting Tuesday, July 3rd. With Independence Day falling on a Wednesday, many in our community will be taking the rest of the week off so DUI checkpoints and saturation patrols will be out in force throughout the weekend. A multi‐agency DUI/Driver License Checkpoint is also scheduled for Saturday, July 7th from 6:00 p.m. to 2:00 a.m. in Coronado.
Impaired‐driving crashes killed more than 10,000 people in 2010, accounting for 31 percent of all traffic‐related fatalities in the United States. That’s an average of one alcohol‐ impaired‐driving fatality every 51 minutes.
Often Fourth of July celebrations start during the day, but last well into the night – making the dangers from impaired drivers even higher at night.
The Avoid the 14 DUI Task Force reminds everyone that there are numerous consequences as a result of being caught driving impaired, such as the risk of killing or harming others, jail time, insurance hikes, potential loss of driver’s license, just to name a few.
The Avoid the 14 DUI Task Force recommends these simple tips for a safe Fourth of July:
Funding for this operation is provided by a grant from the California Office of Traffic Safety, through the National Highway Traffic Safety Administration.