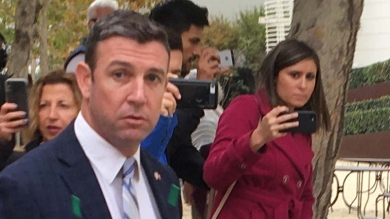 “He has at least two things going for him right now,” says Jeffrey Crouch of American University in Washington, who has written books on presidential pardon powers.

First, news stories suggest that President Trump may be planning to use his clemency power liberally, extending to his close aides and family.

“Second, and perhaps more important,” Crouch said, “is the fact that Hunter is a high-profile Republican supporter of President Trump, which, based on Trump’s clemency track record, suggests that he may already be somewhere on the president’s radar, although it’s impossible to say right now what is going on behind the scenes.”

In front of the scenes is the pandemic, however.

Seven months ago, the six-term Alpine Republican convicted on corruption charges asked federal Judge Thomas Whelan for a delay in his prison surrender, citing COVID-19 concerns. His May 29 prison start was delayed to Jan. 4, 2021.

But the virus still rages — even killing an inmate at La Tuna and infecting at least 18 staffers at the minimum-security lockup. So is another delay being sought?

“No plans to seek a delay,” said Devin Burstein, Hunter’s lawyer, who speedily replied to the question last week.

But Burstein hasn’t responded to queries about whether Hunter seeks a pardon or commutation of his 11-month sentence.

Is that an indication Hunter is counting on clemency?

It’s hard to tell, says Mark Osler, the Robert and Marion Short Distinguished Chair in Law at the University of St. Thomas in St. Paul, Minnesota.

“I certainly suspect that his is the kind of case that this president seems to consider pretty seriously for a pardon,” Osler said Monday in a phone interview. “People he knows and who have supported him.”

But Hunter isn’t going through the usual process — applying for clemency via the Justice Department’s Office of the Pardon Attorney.

In any case, Osler says the Trump White House has basically skipped such steps, where nearly 14,000 bids for pardon or commutation are pending.

“It’s fair to say that — given that we have about 14,000 pending petitions — that the ones that are coming through the official channel don’t seem to be getting much attention,” he said. “Some did hold over from the Obama administration. But it’s been building up ever since.”

“Recall Trump’s tweets when Hunter was indicted, as well as his recent statements to the effect that [he] will be handing them out like Halloween candy,” Litman said via email. “Clearly it’s something that would have occurred to Burstein. And since Trump’s cronies don’t have to go the conventional route of applying to the pardon attorney, you can expect there’s been some direct, if third or fourth hand, communication about it.”

Litman doesn’t see a connection between Hunter not seeking a delay in prison with a bid for clemency.

“They seem independent to me, and given the stats and the success of others like Michael Cohen, what’s the downside?” Litman said.

Attorney Margaret Love, executive director of the Collateral Consequences Resource Center in Washington, said Hunter apparently has no application for pardon or other form of executive clemency pending in the Justice Department, according to the case lookup tool on the Pardon Attorneys website.

He may have applied directly to the White House, said Love, a former U.S. Pardon Attorney (1990-1997) who has recently represented federal clemency clients.

But Love has no way of knowing whether Hunter is using such contacts.

“However, I have heard that many many people are trying to do an end run around the regular process,” she said, “so it would not surprise me.”

“He’s already done some of that,” Osler said. “He’s done that with Gen. [Mike] Flynn. He’s not the first president to do this. Most of us remember Marc Rich [under President Clinton]. And at the end of George H.W. Bush’s administration, he granted pardons to many of the Iran-Contra defendants, who were his associates.”

Hunter, along with fellow GOP convict and ex-Rep. Chris Collins of New York, were the first members of Congress to endorse Trump.

The White House would deny any Trump pardon was political, though.

“He phrases them all as compassionate,” Osler said. “He says that this is ‘someone who is very terribly treated.’ … But the number of people who don’t have a personal connection to him or have been promoted on Fox News is probably less than half.”

Osler was asked: What about Trump pardoning himself?

“The question of can he do it is: Yes. He just has to issue a pardon warrant,” Osler said. “What will matter is later when … a prosecutor tries to charge him and he raises it as a defense.

“What the impact [of a self-pardon] will be down the road is the question.  Will he do it? That’s a jump ball. I don’t think many of us have a clear read either way.”