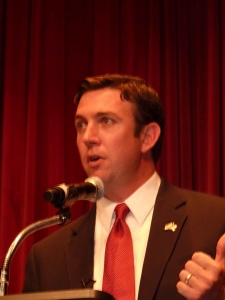 November 4, 2016 (San Diego’s East County) – Congressman Duncan Hunter (R-Alpine) announced yesterday that he will repay nearly $49,000 in personal or unauthorized expenses charged to his campaign, the Riverside Press Enterprise reports.  The action comes months after revelations that Hunter charged up large sums for an Italian vacation with his family last Thanksgiving, as well as money paid to his children’s private school, a Hawaiian resort, an oral surgeon, as well as and purchases of jewelry, groceries, video games and more.

Hunter previously repaid $12,000 after Citizens for Responsibility in Ethics in Washington (CREW) filed an ethics complaint.  Hunter indicated he would have an outside audit of his campaign.

Hunter’s aide, Joe Kasper, has claimed CREW is a ”leftist organization that is targeting Trump supporters,” according to Patch.com. (Hunter endorsed Trump early on and continues to support his candidacy.) However, CREW has a long record of targeting members in both parties.  CREW’s list of most corrupt members of Congress includes 5 Democrats and 11 Republicans; its list of Congressional members under investigation as of April included 6 Democrats and 4 Republicans.

Hunter and Kasper have offered various explanations for the expenses including use of the wrong credit card in error for some initial purchases questioned.  Some items had misleading descriptions in campaign reporting filings; for instance, purchases at an Italian jewelry store were listed as food/beverages but the shop told the San Diego Union-Tribune it does not sell food or drinks.

Hunter told the Riverside newspaper that out of an abundance of caution, he decided to reimburse any expenses not adequately supported by documentation.  The publication provided no details on which items will be reimbursed.

Hunter stated that he takes “full responsibility” for any errors, adding, “I am fully confident that the right oversight and controls are now in place” to prevent repeat errors in the future.

But Hunter’s opponent, Democrat Patrick Malloy, says the problem is “not simply sloppy bookkeeping. It’s corruption.” Malloy told ECM,"Four days before the election Hunter tries to buy your sympathy with a $49,000 appeasement – although his vote can be bought, as shown  in the UT article on the AVIQUE, ours can’t.” (The Avique is an ice breaker ship that Hunter lobbied to fund days after getting a hefty donation from its manufacturer.)

It's unclear whether the FPPC will take action against Hunter or not.  But Malloy states, "I'm squeaky clean...Don't wait for the FEC to do what you can do on Tuesday. Vote him out!"

Hunter also drew criticism back in April from Republican Central Committee member Eric Andersen, who posted on San Diego Rostra that Hunter’s explanation at the time was “not an adequate explanation, not even close. The real question—how could he have acknowledged the errors in his campaign disclosures, but not immediately rectified them by paying back the money, thus in essence going several months without addressing violations of the law?”

Sorry 'Dunkin', your 'explanation' sucketh big time, as does your choice of presidential timber. I sure hope you get replaced before becoming just another 'career politician' who is more interested in serving yourself than your constituents. You're a disgrace!