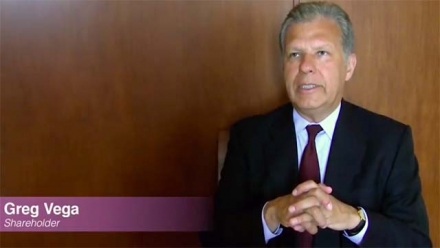 July 9, 2019 (San Diego) - At Monday’s hour-long hearing for Rep. Duncan D. Hunter, 22 minutes were devoted to whether two (or possibly three) assistant U.S. attorneys had a political ax to grind against the indicted Republican.

Hunter attorney Gregory A. Vega argued that the presence of prosecutors Emily W. Allen and Alana Robinson at a La Jolla fundraiser for Hillary Clinton on Aug. 7, 2015, raised questions about their impartiality in the campaign funds spending probe.

“The irony of this case,” he said, “is that the defendant’s lawyer, Mr. Vega, was at that exact same fundraiser that exact same day. He was there to support Mrs. Clinton and he donated to be there.”

Vega didn’t mention that in his 22-page motion. It was news even to Morgan Cook of The San Diego Union-Tribune, the most knowledgeable reporter on the Hunter beat after her groundbreaking early scoops helped trigger the federal probe — and later 60-count indictment.

After court, the congressman’s father acted as if it were common knowledge.

“(Vega) talked about it a lot,” said ex-Rep. Duncan Lee Hunter. “When I was with him, he said: ‘But for me being there, nobody would have ever known that'” the San Diego prosecutors were at the Clinton event.

OpenSecrets.org reports that between 1998 — when he himself was an assistant U.S. attorney in San Diego — and 2018, Vega contributed close to $32,000 to Democratic candidates and causes. Among his favorites: Rep. Bob Filner (five times) and California Attorney General Kamala Harris (twice for a total of $2,000).

“Greg’s a friend of mine, and he was a good U.S. attorney,” veteran defender Jeremy Warren said Monday. “Part of being an advocate is taking a position you don’t personally agree with but you can justify professionally.”

Commenting on why prosecutors were at the Clinton fundraiser, Warren said members of the local U.S. Attorney’s Office are always invited. (Prosecutor Conover made a similar point.)

“I’m sure Greg went to some of those when he was in the U.S. Attorney’s Office,” Warren said in a phone interview.

Why would Hunter, among the first to endorse Donald Trump for president, trust his fate to a dedicated Democrat?

“Maybe Hunter and his people think that having a guy like Vega, with his juice as a former U.S. attorney [1999-2001], is the right guy. Greg’s a great lawyer. You can’t go wrong having him as your attorney.”

Vega won some notoriety in 2016 when he came to the defense of a former Indiana high school classmate and prosecutor in his Department of Justice office:  Judge Gonzalo Curiel.

“Vega, who had known Curiel for decades, … finds it ironic that a man who put his life at risk to fight the scourge of drugs from Mexico is being portrayed as incapable of being fair because of his Mexican background,” said a June 2016 report by NPR’s Nina Totenberg. 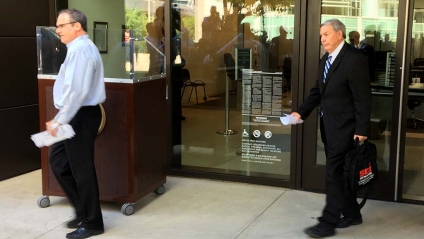 Vega didn’t respond to a request for comment on his donation history or unfairness claims.

Conover said Hunter’s logic — that attending a Clinton fundraiser as a supporter necessarily means being biased against Hunter — “would mean that Mr. Vega is biased against his own client.”

“Of course, the United States would never make such an absurd argument, but that’s the argument being made here — that attendance at an event of one candidate of a party makes you biased against any other candidate of the opposing party,” he said.

“Even if you were to assume the prosecutors attended this event because of their support — which they do not — attending an (event) for one candidate does not mean you have political animus against another candidate.”

He wrapped up his remarks: “That logic doesn’t follow. This is a frivolous motion.”

Having lost every motion Monday — including a bid to move the trial out of San Diego — why is Hunter persisting?

“Possibility one: Congressman Hunter believes that if the case goes to trial he can win,” said Luna, political science professor at San Diego Mesa College. “The Supreme Court set a fairly high bar for corruption charges in the Virginia Gov. McDonnell vs. the United States case a couple years ago.”

Maybe Hunter thinks the government won’t be able to clear the bar in this case, he said.

“Possibility two: He’s hoping that ultimately the president might intervene and give him a pardon or clemency since he’s been such an ardent supporter of the president and has been arguing this is all a politically motivated attack, which is red meat for the president to pounce on,” Luna said via email, noting the pardon given to sheriff Joe Arpaio in Arizona.

A third option: Now that Hunter’s trial — expected to last four weeks — is a certainty, “he may actually be looking for a possible deal” in which he resigns from office for a reduced sentence.

“I tend to think he will hold out until just before trial before any deal is made if such a deal is in fact going to be made,” Luna said. “All things told, though, the odds are going up that we will have a special election for the district before 2020. I’m surprised that the House has not moved to censure him yet.”

Warren, the downtown San Diego defense attorney, offered other takes on why Hunter is hanging tough.

“I think he was emboldened by what happened with the Navy SEAL [Eddie Gallagher], who was acquitted despite what appeared to be very strong evidence,” Warren said.

Hunter’s best shot at keeping his congressional seat is to win the case, he said.

Given his support in parts of San Diego — and the need for a unanimous verdict on any given count — Hunter may hope some jurors “might support him no matter what,” Warren said.

Defense attorney Vega might also be throwing every motion at the wall in hopes that one sticks at an appellate court if Hunter is convicted.

“I also think that in the back of his mind, he’s hoping for a pardon,” Warren said. “And finally, I think he’s concerned about protecting his reputation. If he pled guilty, he’s admitted he’s done something wrong, whereas if you lose at trial, it could have been the jury [that] got it wrong. Or the evidence was suppressed or prosecutors were biased and unfair.”

Warren says he doesn’t assume anything in the indictment is true, remarking: “Who knows? Maybe the poor guy is totally innocent.”

But he doubts the prosecution would offer Hunter something akin to Vice President Spiro Agnew in 1973 — resign from office and stay out of prison.

“I just don’t see that (Agnew case) here,” he said. “But we’re in sort of unique times right now.”

What about a presidential pardon?

Trump might not care to rescue a Republican in a state that voted overwhelmingly for Hillary Clinton, he says.

Trump is “not going to win any votes here. So it’s not like … Sheriff Joe, [where] he’s really pandering to certain segments of Arizona.”

On the other hand, Warren said, the president might bail out Hunter if he felt it was going to help win votes in other parts of the country.

But: “I don’t know how much people care about Duncan Hunter.”

In this day of trillion/billion, millions; I wouldn't think $7500 would be to heavy to carry. I see so much of this, it converts to Fake News.