Community members voice concerns over military training center on reservation, seek answers as to cause of wildfire that now exceeds $2.5 million in firefighting costs 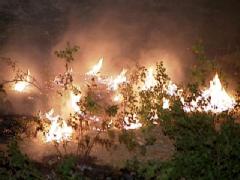 In Anza Borrego-Desert state park, portions of Palm Canyon and Indian Canyon have burned according to posts by firefighters at a wildfire firefighting forum.

Currently no structures are being threatened, though an outbuilding has burned. Patch.com in Ramona reports the structure was a guard shack at the ERTC (formerly known as Eagle Rock Training Center) 25,000-acre military training facility on the Los Coyotes Indian Reservation.

As of late last night, the fire was burning north through older heavy brush with no documented fire history, and east through light grass and scattered brush.

Ramona.Patch.com offered this description: “Smoke from the fire appeared as a white cumulus cloud above the hills overlooking Borrego Springs on Saturday. As the late afternoon turned into evening, the sky became a dark pink-and-gray backdrop to palm trees in the town. Helicopters flew in like huge insects, sucking up water from a small lake at a golf course and flying off to drop it in the canyons above.

Except for the sound of the helicopters and roosting birds, the town was eerily quiet.”

Questions have arisen on the origin of the fire that was reported around 10:30 p.m. Thursday night near Highway 79 on the Los Coyotes Indian reservation, where the Eagle Rock military training center is located.

A source who is familiar with the layout of the reservation, but who spoke on condition of anonymity, told ECM that the area where the military base is located is closed to the public. The source indicated that camping areas are on the western side of the reservation, “while the fire is on the eastern side where the training center is.” The website Wildfire Today also has posts indicating the fire started on the east side:  http://wildfiretoday.com/2011/07/22/eagle-fire/. A reporter for another local publication also has informed ECM that the fire originated on the eastern portion of the reservation in the vicinity of the training camp--not the public campground area.

Brian Bonfiglio, former Vice President of Blackwater USA (now called XE) “cut a deal with Los Coyotes for use of a remote section of the reservation for military and police training,” the source recalled, adding that live munitions fire and vehicles potentially could spark ignition. “So how does a fire start in clear weather on their reservation in a very remote section…with apparently no homes nearby?”the source asked. “Smells like smoke to me.”

At least one fire has previously been attributed to activities at the training camp. The North County Times reported on May 13 that a small brush fire started as a result of live-fire on a shooting range at Eagle Rock: http://www.nctimes.com/news/local/sdcounty/article_84c1b511-5f34-5145-a8...

The question of whether any flammable materials, such as stored fuel or ammunition, may have exacerbated the fire, or whether activities at the facility may have actually caused the blaze, remain unknown.

Several members of the community have expressed worries over the facility. “I’m very concerned,” one property owner near Warner Springs told ECM. “We want them out of here.” Specifically, the property owner has voiced fear over the fire hazard he believes the ERTC facility poses to neighbors.

Comments posted on stories at local media outlets and e-mails received by ECM have suggested that if ERTC activities are found to have caused the fire, the company should be held responsible for the firefighting costs, now in excess of $2 million.

Cal-Fire has declined to answer questions on exactly where the fire started, or its cause, pending completion of an investigation. The agency also declined ECM’s request for a copy of the call that reported the fire initially.

ECM has contacted Brian Bonfiglio at ERTC to request comment and will publish his responses when or if we receive a reply.

Anyone with information on this fire may contact editor@eastcountymagazine.org

Only 2 firefighters were injured? News says it was 18. This was a tragic day. -GAR Labs