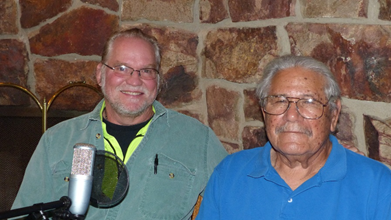 July 5, 2019 (San Diego’s East County) –Called in by family members or others to search for immigrants who have gone missing after crossing the border, volunteer with the nonprofit Aguilas del Desierto (Eagles of the Desert) brave triple digit heat, rattlesnakes and other perils in a desperate effort to save lives.

Hear our exclusive interview with Vicente Rodriguez and Henri Migala, originally aired on KNSJ radio earlier this year, at the audio link and scroll down for highlights.

According to the Border Patrol, 7,000 migrants are known to have died crossing the border since the wall began. The toll is likely much higher, since it doesn’t include those missing and never found.

Aguilas del Desierto’s original founder had lost a loved one who perished in 2009 crossing the border in Arizona.

The volunteers work with the consent of the Border Patrol, and by law is obligated to turn over survivors to the Border Patrol.  But that’s better than the alternative – recovering a body—often bleached bones that blend in with the rocks, which is all too often the tragic result. When remains are found, a DNA test is done by authorities to help identify the deceased.

“When we go out there and search for somebody and we don’t find them, I don’t know whether that’s a good thing or a bad thing,” says Migala, who adds that their efforts do help bring closure to families—and sometimes, save lives.

Migala, a humanitarian who has participated in international aid efforts around the world, recalls one immigrant found alive who had buried himself alive to escape triple digit heat.

“They will go out of their minds, just literally,” Rodriguez says.

The Border Patrol’s BORSTAR is called in, in such cases, for a rescue, after which the person will face deportation proceedings.

Migala tells of searching for a man whose wife reported him missing.  “He made it to the canals and got washed away…the sad thing was he was jumping the fence to be at the birth of his first grandchild.”  His daughter was so overcome with grief that she went into premature labor the next day, a month early.

The wall, 15 to 18 feet high, had several rows of serpentine razor wire, did not stop the determined man from crossing, he noted. But after crossing with a group, the man who could not swim drowned in the canal.

Rodriguez, an economist and ex-Marine who grew up on the border, says, “What needs to be done is to look at what’s causing this people to come across the border,”  noting that most immigrants today are coming from Central America, not Mexico, and many are fleeing violence. “I believe the Central American countries really have to be helped.” He says they need industrialization and more trade.

Migala says the historic involvement of the U.S. has been lost to many, noting that in the 1950s, almost 50% of Guatemala belonged to big U.S. corporations such as Dole, yet the average Guatemalan could not afford to buy a banana.  The U.S. intervened to install a government which led to “ethnocide – it’s documented they killed over 200,000 indigenous Mayans,” he says.

By contrast Nicaragua at one time had high literacy and healthcare rates, but it was based on a socialist model. The U.S. backed the Contras, which led to the Iran-Contra scandal, to overthrow Nicaragua’s government.

As Colin Powell said in Iraq, “You break it, you own it, and I think we broke a lot of these countries.”  Instead of spending $5 billion on a wall, he would rather see the funds spend on aid to Central America to boost their economies.

Migrants risk their lives and are often preyed upon in their journey to the U.S. Migala contends if economic reform were brought to Central America, we would not have a severe immigration problem.  Migala notes that crossing the border is so dangerous, and requires carrying enough water for at least five days, that only the "poorest of the poor" attempt illegal crossings to seek work or visit family, for the most part; cartels and terrorists have ample resources to enter through checkpoints, legal visas or other means. Most fleeing violence are apt to present themselves at the border and seek asylum.

Rodriguez recalls a man deported from California who went to Arizona, where borders are less secure, and died trying to reenter.  He had five children left behind here in California.

Aguilas del Desierto has a large network of contacts across the U.S. border region, as well throughout Mexico and Central America.

The organization get an average of 10 calls a day from people seeking help to save lives. But sometimes they can’t respond quickly enough when a family member reports a loved one missing, because of lack of resources.

The group also disseminates migrant centers in Central America and Mexico warning about the dangers of crossing to dissuade people from attempting it, but also information on who to call for help if someone is in danger.

Donations, four-wheel-drive vehicles and volunteers are needed to help save lives.